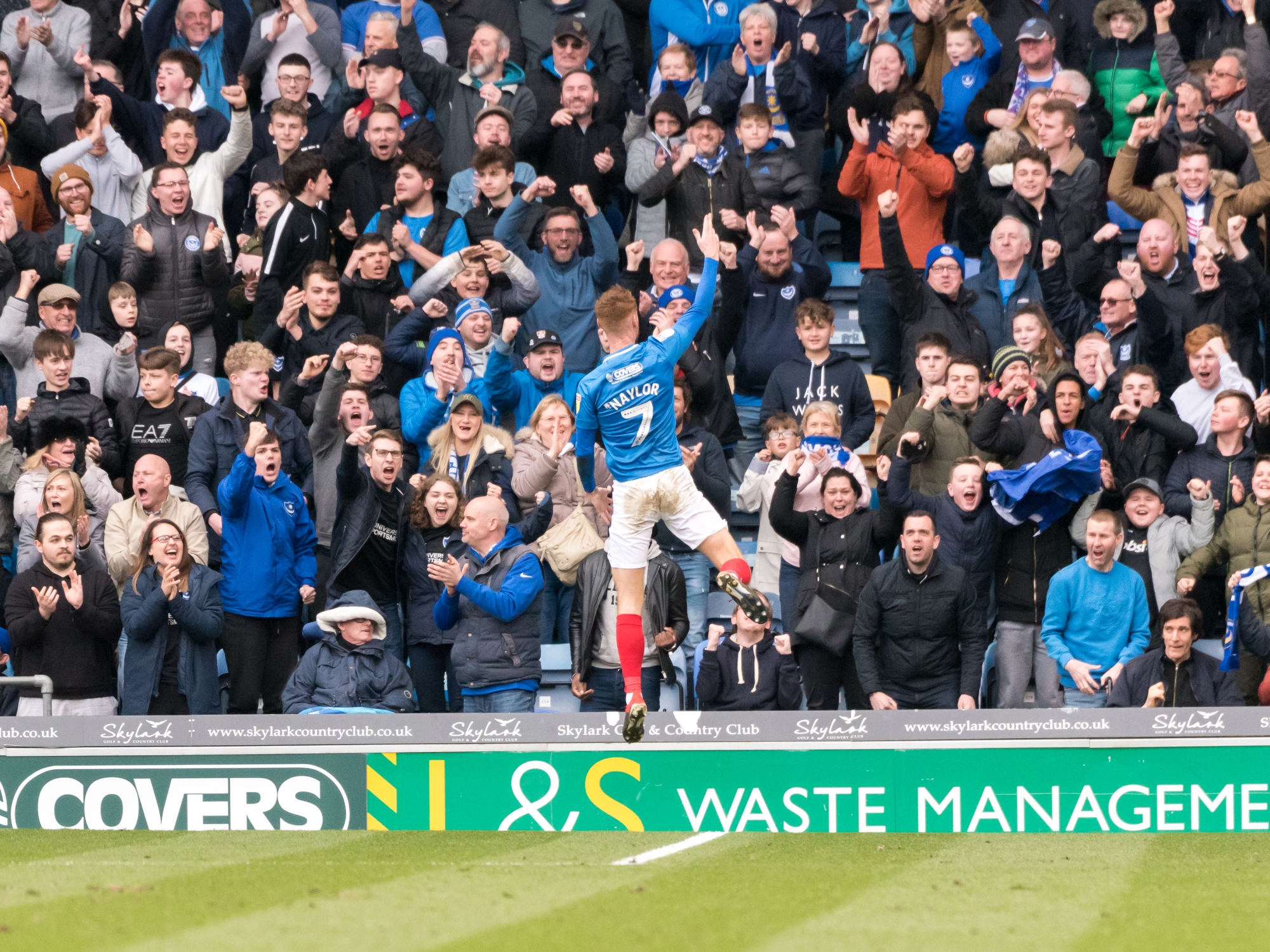 Sitting in fourth place with a game in hand on Barnsley in second, Pompey travel to the Pirelli Stadium on Good Friday looking to extend a run of 5 consecutive League One wins.

With former Burton Albion man Tom Naylor putting in one of his better performances of the season against Rochdale, Mitch Bailey reflects on the twenty-seven year-old midfielder’s performance at the weekend and the upcoming match against his old employers as the Blues continue their push for second place.

Nottinghamshire born Tom Naylor who signed for Pompey on a free from Burton Albion in the summer has yet to win over all of the Fratton faithful, however has been an instrumental part of the team, particularly in recent weeks.

Speaking to the club website, Naylor said “Every team has a bad spell during the season and we’ve got our one out the way, so we need to smash these last five games.”

Following the departure of Millwall loanee Ben Thompson, Pompey’s midfield really struggled to find its feet in a rut of 8 consecutive games without a win. With Kenny Jackett mix-matching by pairing Naylor with five different midfield compatriots.

It wasn’t really until the draw against Bristol Rovers that Jackett really cracked the combination which would help turn Pompey’s results around. A duo of Ben Close and Naylor that has been ever present since that Tuesday night back in February.

The combination of the two players with two very different playing styles has worked wonders for the midfield as a promotion chasing Pompey continue to put the pressure on the top three. The amalgamation of little (Close) and large (Naylor) has brought out the best in both players – the solution to the midfield conundrum was under Kenny Jackett’s nose the whole time.

Coming through the Mansfield Town youth set up, Naylor had previously been deployed at centre-back and right-back by then Derby County boss Nigel Clough. The effect this experience has had on the 6’ft 2 midfielders play style is evident as he continues to thrive in the ‘Makélélé’ role.

Providing protection to the back four, diverting danger and breaking up play is the trademark of Naylor’s play style. In an arguably man of the match performance at the weekend against Rochdale he registered an impressive 100% pass completion. Be it the long range cross-pitch ball to Curtis a minute or two in or the smaller one or two pass combinations between himself, Burgess and the rest of the back four as he dictates the play from deep.

Tactically, Jackett has the ideal combination of forward surging centre-halves and a deep lying midfielder that will happily fall back into the back four whilst Clarke embarks on one of his adventures into the middle. Ensuring that if possession is lost upfield that the threat to the defence is minimal.

Possessing someone with the footballing experience of Naylor in the defensive midfield has only nourished and complemented one of our own. Born and bred on the island, Ben Close has rightly so been handed an extended deal seeing him stay until 2021, at least.

Having a player with the experience and awareness of Naylor alongside Close has allowed him to develop and flourish into the midfield maestro that had so frequently been missing.

A professional footballer since 2009 and now on his tenth club following a series of loan spells and permanent stays at Derby and Burton, Naylor is the hard-hitting, heart on his sleeve kind of player that fans all appreciate.

Numerous times this season has seen Naylor launch himself in front of incoming shots and crosses into the box. In the process making countless crucial blocks and interceptions, which takes us onto the first of Pompey’s Easter opponents.

If it wasn’t for a crucial interception in the reverse fixture at Fratton Park to snatch the ball away from Jake Hesketh the then Southampton loanee, Pompey may well have come away from that game without a point from that hard fought draw.

The Brewers are currently on their best run of form of the season having not tasted defeat in their last five games. The last time they were conquered was by the hands of a Charlton team who’s momentum continues to grow having defeated table toppers Luton at the weekend.

A fixture that has only occurred 5 times in both of the football clubs histories, both with an equal record when head to head. Won one each and the remaining three bouts have all ended in draws.

The Staffordshire team two top scorers, Liam Boyce and Lucas Akins were both on target in the weekend’s game away to Scunthorpe. Although not the only source of goals for Clough’s team with usually a four-man midfield chipping in with crucial goals. Ex-Havant & Waterlooville loanee Alex Bradley who impressed in his short spell at West Leigh Park, now on loan at Burton could well feature if called upon in the televised match.

Portsmouth have won one of the two appearances at the Pirelli Stadium. Both which took place in League Two, before the Burton upon Trent outfit left League Two in their search for Championship football from which they were relegated at the end of last season.

The only win came from goals scored by Ricky Holmes and Simon Ferry with a late ninetieth minute consolation goal from Burton defender Zander Diamond. A team which contained players such as John Sullivan, the now retired goalkeeper who is currently selling real estate in Las Vegas and Yassin Moutaouakil, the former French under-21 defender who has since returned to Hayes & Yeading since his release from Portsmouth in 2014.

Burton returned from their one season in English football’s second tier and currently battling it out with Doncaster, Peterborough and Coventry for the last of the four play-off positions in League One. Albeit an outsider in the race you cannot rule them out based on current form.

It shows how far both teams have progressed up the footballing pyramid since their first meeting in September 2013.

If Pompey are really looking at putting the pressure on Sunderland and Barnsley, Friday’s game at Burton is a must win fixture against a side bang in form. It will be a stern test, however can see the Blues coming away with a 2-1 away win courtesy of Hawkins and Lowe.

Who knows, look what happened back in League Two. It doesn’t matter how long you are at the top of the league (or in a promotion place in this case) as long as you are there come the full-time whistle on May the 4th.