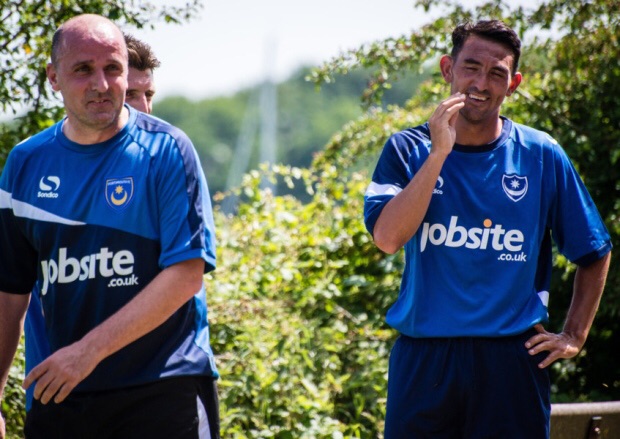 Mark Docherty reflects on recent pre-seasons and looks ahead to the new 2015/16 season.

The past two seasons, Pompey have been labelled as favourites for League 2. However, on both those seasons, Pompey have failed to live up to those expectations. So, will this season be a repeat of the previous two or will the Blues finally be able to escape the Football League’s basement division?

In the 2013-14 pre-season, Pompey beat Havant & Waterlooville 5-0, beat Bognor Regis 4-2 and lost 2-0 to Rayo Vallecano and 2-1 to AFC Bournemouth. However, despite the encouraging pre-season, Pompey almost got relegated and we’re only saved by Andy Awford’s appointment as caretaker manager.

In 2014-15, Pompey beat Havant & Waterlooville 4-0, Bognor Regis 6-1 and lost 3-0 to Ebbsfleet, 3-2 to AFC Bournemouth and 3-1 to Charlton Athletic in pre-season. The team still finished in the bottom half of the league, showing that pre-season is not the defining factor for how well a team will do.

This season, Pompey have drawn with Havant & Waterlooville 1-1, 1-1 with Bognor Regis, beat Gosport 3-2 and Coventry City 2-1. Although Pompey have picked up two draws against non-league opposition, they have beaten the best team they have played and seem to be coming together as a team as the season draws nearer.

A second point of comparison is the people in charge of the team. In 2013-14, Guy Whittingham started the season as manager, but was soon sacked and replaced by Richie Barker when his side was stuck at the bottom of the table. However, Barker only made the situation worse and when he was sacked only the heroics of Andy Awford could save the club from dropping out of the football league.

Last term, Awford started the season as manager but was replaced at the end of May when he was sacked and his assistant, Gary Waddock took over the reigns. The club still finished in a low mid – table position but Pompey fans were far from happy.

But now, Paul Cook is in charge. This is the first time while the Blues have been in League 2 that an experienced manager potentially has a full season to achieve his goals. Both Whittingham and Awford were taking their first ever jobs in management while at Pompey and so were not best placed to lead the club to promotion.

Cook, on the other hand, is a vastly experienced manager who has previously won League 2 with Chesterfield and made the League 1 play offs at the first time of asking last season.

This is encouraging, to finally get a manager who has personal experience of doing well in this division. Also, when you hear Cook talking about what he expects from the season ahead, he simply fills you with confidence. His honesty when he talks to the press is refreshing, seeing as we’re used to managers saying all the right things and not delivering on a match day.

Finally, the most important part of any team is the players representing it. In 2013-14, the players at Pompey were changing every week, not allowing any stability or understanding to form between players. In 2014-15, the team was more star but Awford insisted on changing formation every week. This also hindered team spirit and cohesion and thus led to a disappointing season.

This year however, Paul Cook has arrived and let eleven players leave and so far recruited ten. This seems to mean that Cook is putting together a streamlined squad which should help team togetherness. He has also come out from the start and said he will be using a 4-2-3-1 system. This should allow the team to get used to the tactic and improve performances.

So, having taken all this into account, I think this season we can expect solid performances, if nothing else. We have seen what has happened in previous seasons and are able to compare between them. Cook, however, has been putting together his side and preparing them for the season ahead in a different way from previous managers.

The Blues may be in for a promotion winning season, now that they have the money, the fans and someone with experience to orchestrate their rise up the leagues. We have seen two ways not to win promotion, so a third different method, this time one that has worked before, now may just be the way to start our rise back to where we belong.

You can read more from Mark here at Fratton End View.