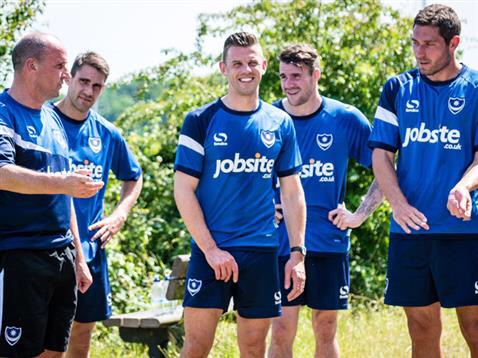 The latest in our series of pre-season blogs comes from Ian Darke, BT Sport commentator and life-long Pompey fan.

New season. New manager. Same optimistic mood every summer. So why should this campaign be any different?

Quite simply because Paul Cook has assembled what looks a far stronger squad of players. You can talk about fight and committment, tactics and energy all you want – and those qualities are indeed important.

But in the final analysis it really comes down to quality and a touch of class. It was not there last season. Without it, success is likely to prove elusive.

From the moment Paul Cook walked into Fratton Park, he was all business. “The supporters have carried this club for too long. It’s time to give them something back,” he declared.

There was, too, a vow to provide entertainment, a commodity in short supply for most of the recent seasons at Fratton Park.

Of course, the manager is on his honeymoon period. Bold talk in the summer has to translate into points when the league action begins.

There is a danger that fans will expect to see a revolution. The reality may be of a team which needs a little time to gel and get the balance right.

But I think the ingredients look good. The manager took Chesterfield out of League Two and came within a whisker of leading a modest club to the Championship.

He gives every impression of a man who knows what he wants and who he thinks can do it. His interviews are laced with humour and sometimes refreshing honesty.

After one pre season friendly he was asked if he could see the team taking shape. “No, not today” was his brutally blunt answer.

You get the feeling this is a boss the players can relate to. He will be very straight with them.

Gary Roberts looks to be the key signing, a player who can make things happen in attack and give Matt Tubbs the service to thrive.

Kyle Bennett and Enda Stevens are two others who were operating at a higher level with Doncaster last year.

I’ve seen quite a bit of Michael Doyle. Tough, gnarled and with plenty of nous to provide the steel to go with the silk we hope will be around him. Worth noting all his football has been played higher than this.

But the ever reliable Paul Robinson will be important again in defence. For me, he is 7 or 8 out of 10 every week. I have not honestly seen enough of Burgess, the new man from Peterborough, to have a relevant opinion.

This might also be a big year for Conor Chaplin, who can smell a chance from a mile away, and Ben Close, whose eye for a progressive pass in midfield caught my eye in last season’s final game against York.

If those two can make their breakthrough this season and the likes of Webster and Atangana can move on a level (they might), Pompey will be laughing.

But it’s easy to fall into the tender trap of believing the hype that Pompey will outclass the division.

It is quite possible. But it’s a long and arduous campaign which always throws up a hundred obstacles. As always, opposing teams will see bookies favourites Pompey as a prized scalp. The players have to be big enough to cope with that pressure. Last season some of them found the shirt a bit heavy.

There will always be bad days and off nights. It goes with the territory. But crucially it’s a rocky road that Paul Cook knows well.

I believe he and this more talented squad will get enough right to end Pompey’s agonising stay in the basement. They might just have a little too much flair for some rivals. When could we last say that?

My advice is to stay calm and philosophical at all times. Not like me.

😩 A blow for #Pompey - Jayden Reid has ruptured his cruciate knee ligament and faces a lengthy spell on the sidelines
9 trialists in total featured in tonight’s 2-0 defeat at Chelsea U23’s.
#Pompey starting XI at Chelsea U23’s:
🧤#Pompey are reportedly set to make a move for Peterborough goalkeeper Daniel Gyollai