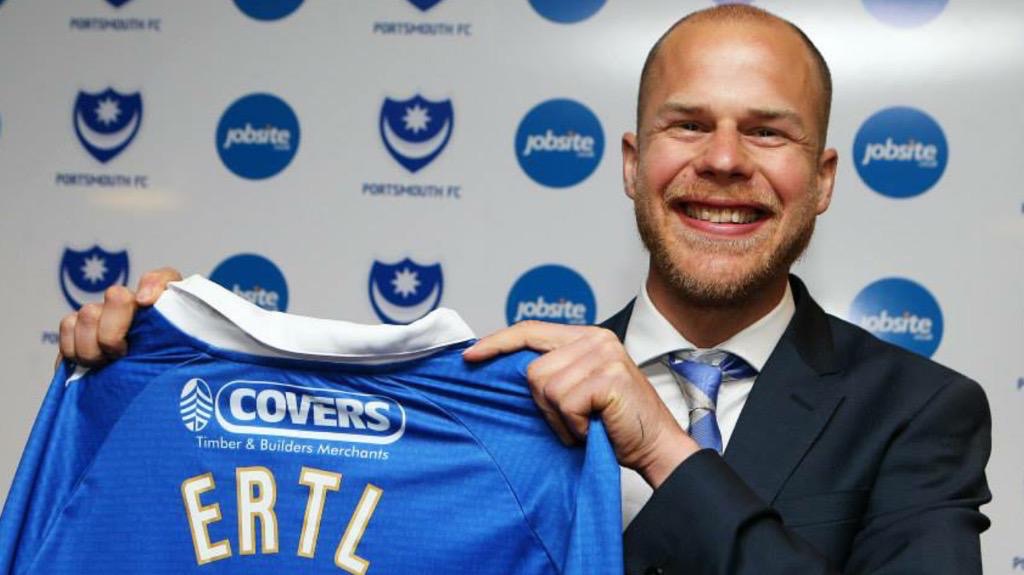 As a footballer, it is fair to say Johnny Ertl divided rather than ruled.

On Wednesday, with that hoary old ‘by mutual consent’ chestnut hanging from the official site article tree, he left the club. The class manner of his leaving suggests the sentiment was probably true this time.

Since his arrival on a short-term contract basis in September 2012 – amazingly still fewer than three years ago, such has been the churn of players in the tumultuous months which have followed – Ertl had been a rare constant.

As the ground shifted beneath the feet of Pompey fans, while the very existence of the club was in doubt, Austrian-born Ertl, who had carved out a successful career in England at Crystal Palace and Sheffield United, at least ensured the goalposts remained in more or less the same place.

His debut set the tone for his Marmite-quality footballing ability. With then manager Michael Appleton’s rag-tag and bobtail squad struggling, Ertl selflessly made himself available at once for an early September fixture with Oldham at Fratton Park, possibly short of full fitness. His reward: the ignominy of scoring the only goal of the game – in his own net.

With the club in administration and, as autumn turned to winter, the prospects of an imminent resolution receding fast, new caretaker boss Guy Whittingham – Appleton had understandably leapt from the frying pan, albeit into the Blackpool fire – put his faith in Ertl in the heart of his midfield.

No matter that Pompey were breaking records for all the wrong reasons – nine straight defeats from December to February and a 21-match winless run from October to February – Ertl was there, never giving less than 100 per cent for the cause, wholeheartedly filling in in midfield or defence, always putting the needs of the team first.

So when Pompey finally brought that miserable run to an end in March with a 2-1 win at Crewe, one of the more memorable images on the final whistle was Ertl celebrating with the long-suffering faithful.

In spite of his tenuous and temporary status, what was clear to everyone was the Johnny ‘understood’ what he was involved in: a fight for the very soul of club. And it was clear he was on the side of the angels.

Ironically it was only another non-British player in Ricardo Rocha – veteran of not one but two administrations, not to mention two and soon-to-be three relegations – who came closest to matching Ertl’s enthusiasm for the club and its values.

Once Whittingham was made permanent manager as the club came out of administration, signing Ertl on a permanent deal was a top priority.

Seeking security, not to mention his desire to put down roots in Portsmouth, he hung out for a three-year deal – a rare beast in the lower leagues.

He got his wish and, now installed as captain, the fairy tale ending would see him lead the team back to an instant promotion. The dream lasted approximately an hour.

With Pompey 2-1 down to Oxford in the opening game, in front of 18,000 fans, Ertl went up for a high ball and his yellow-shirted opponent crumpled to the ground. At once surrounded, the referee pulled out a red card. Even to this day the injustice burns bright. Anyone who knows Johnny knows he would never deliberately set out to hurt an opponent.

As a player, Ertl was probably never quite the same again. Whittingham was gone by November and under his replacement Richie Barker, Ertl was further away from the first team than long-term injury victim Tom Craddock.

Typical of the man, whatever his private frustration, publicly he remained loyal to the cause, and got his head down in training.

As Richie’s short-lived reign collapsed in ruins at Rochdale – a 3-0 defeat in March left Pompey out of the bottom two only by a hairsbreadth – who was there to steady the ship for the in-coming Andy Awford, tasked with executing if not a great escape, at the very least a pretty darn good one?

Of course. Johnny Ertl was back in the side for the away game at Newport on March 29 and turned in a typically solid performance to ensure Pompey claimed a vital 2-1 win which kick-started the climb to safety.

Under Awford, Ertl was to remain a bit-part player, but whenever he was back in the fold, you were often left with a feeling that he’d added an imperceptible je ne sais quoi that we’d missed. In fact, it was probably character.

For Johnny was far more than a simple footballer. With his partner (and now wife) Selma his idea of a summer holiday was never a fortnight on the beach in Ibiza, but trekking the globe seeking out new experiences and ideas.

In the long hours footballers spend not training or playing, it was not the golf course which called, but university and further study for his masters which may well hold the key to a future in sports management.

But above all, Johnny Ertl became a man of the people. Portsmouth people. An ever-reliable ambassador who you would always know would say or do the right thing.

On a personal note, his support for the club’s inclusion and diversity work was a huge help to me. He had time for everyone, and quality time at that.

That he was never a Pompey great on the field is not for dispute. But as a man, we have had few finer at Pompey.

Colin Farmery is PR consultant to Portsmouth FC. The view in this article are his own.