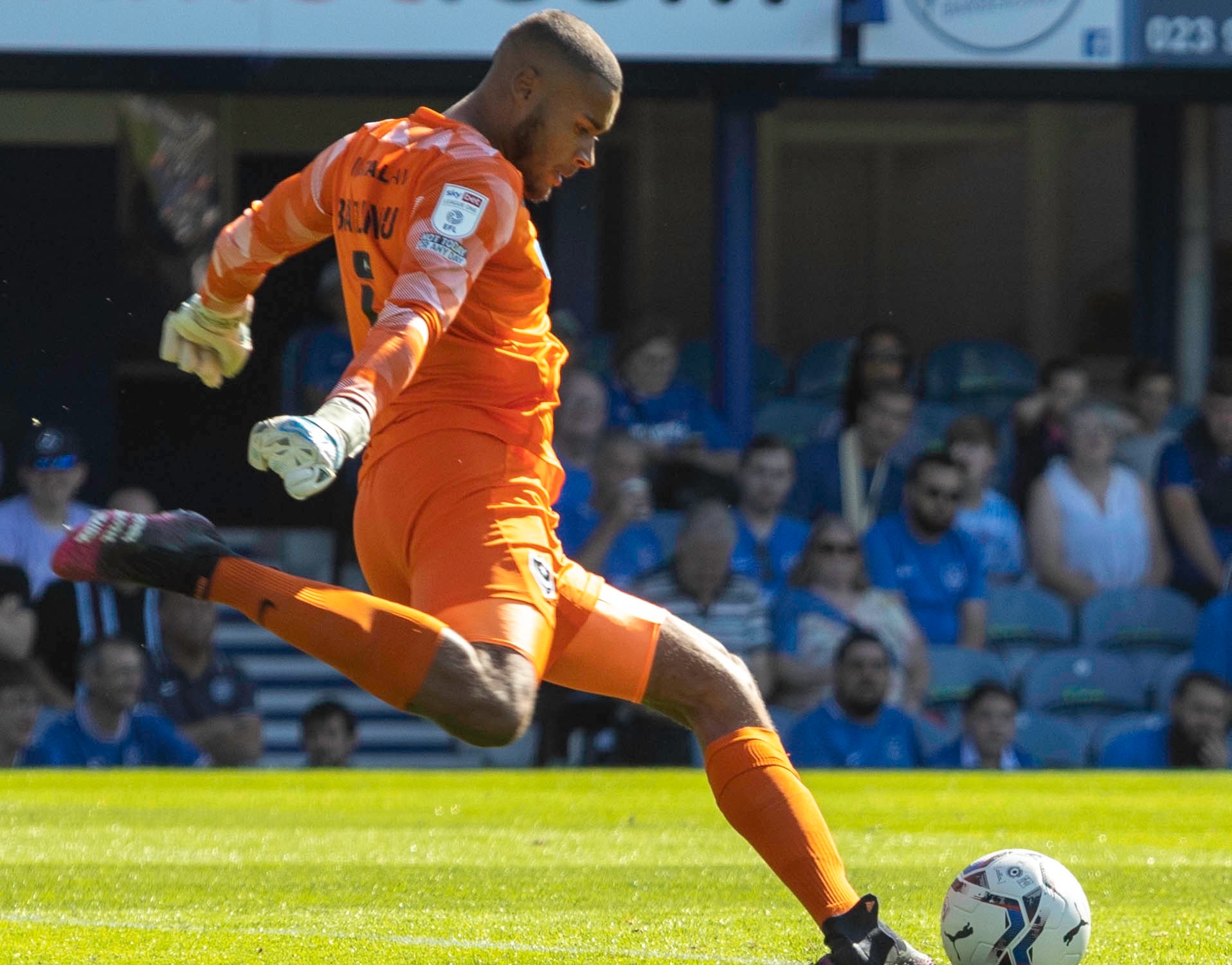 Saturday’s demolition job on Sunderland concluded an up and down first ten games for Danny Cowley’s Pompey. The season’s opening months have seen a struggle for consistency from large swathes of the Pompey squad.

However, there is a common agreement among the Fratton faithful that one player has been head and shoulders above the rest. Gavin Bazunu has had a whirlwind start to the 2021/22 season; establishing himself as Pompey’s number one as well as securing the shirt for the Ireland national side and saving a Cristiano Ronaldo penalty.

I won’t be alone in thinking, how have Pompey managed to get hold of this lad?

From an outside perspective, it would be easy to assume that Bazunu being Pompey’s standout performer has meant that the Blues have been under constant pressure and the Irishmen has pulled off endless world-class saves; this has not been the case.

Maturity beyond his years, immaculate shot-stopping, distribution that is as good as you will find at Championship level and a technical ability that would have seen him playing in Centre midfield for Kenny Jackett’s Pompey, have all seen the Irishmen become an immediate fan favourite.

Firstly, Bazunu has just turned 19. His maturity and professionalism are way beyond his years. We often see young keepers make more mistakes than their older counterparts.

Mistakes will be made, but it is how they respond to these setbacks. Bailey Peacock-Farrell was being lorded as the best in League One a few weeks ago. A costly mistake at Ipswich and a poor attempted save against Oxford have now got Sheffield Wednesday fans questioning their former saviour.

With Bazunu, you do not feel that is the case. Bazunu has misplaced two to three passes this season, but every time has rectified his error immediately, with none of them leading to a goal.

From a Pompey perspective, Bazunu has been one of the main reasons for Pompey’s significant shift in style of play from the Kenny Jackett era.

After having a good shot-stopper in Craig McGillivary, it was hard to realise how much a sweeper-keeper like Bazunu can influence a side’s style of play. Pompey’s new number one almost acts as another ball-playing defender at times, which is what you would expect from any young keeper from Manchester City.

He is always an option and moves the ball quickly to the centre halves. Apart from Sunderland on Saturday, Pompey have dominated possession for many of their fixtures and Bazunu is an integral part. It feels at times that the Blues have an extra player on the pitch.

However, it is not just his short passing that has been key to Pompey having so much possession. Bazunu is comfortable missing out phases of play to hit longer pinpoint passes to advanced full-backs and wingers; Pompey’s first goal on Saturday came from Bazunu picking out Lee Brown in an advanced position.

The adverse conditions meant that Pompey diverged from their usual tactics of playing out from the back, and Bazunu was extremely mature in coming to terms with the conditions early on. Unlike his Sunderland counterpart, Bazunu looked to use his excellent kick ability to go longer.

According to Wyscout Bazunu made 11 longer goal kicks and only attempted two successful short passes. In Pompey’s previous fixture against Burton, he completed 25/25 short passes, indicating his ability to adapt to different situations.

For those Manchester City and Ireland fans who may not have seen much of Bazunu, he is not merely a glamourous modern-day sweeper-keeper who cannot do the basics.

His shot-stopping has already earned Pompey some valuable points this season and is currently ranked fourth in League One for Saves per 90. The fixture at home to Shrewsbury saw Pompey’s number one make three top-class saves; getting low down to his left to stop a certain goal for the Shrews from a Sam Cosgrove header.

Considering his towering stature Bazunu’s agility makes his shot-stopping one of his best attributes. His worst performance came against Burton Albion, where he still managed to pull off two acrobatic stops to prevent Pompey from further embarrassment at the Pirelli Stadium.

It is hard to criticise Bazunu at all this season. He hasn’t been liable for any goal that Pompey have conceded this season, his catching from crosses hasn’t been tested that much, so it will be interesting to see how he deals with an ariel bombardment from the likes of Wycombe.

Although Bazunu’s size and physical stature should see him excel against powerful direct sides, with 100% success rate in ariel duels so far this season. It’s one aspect of his game to keep an eye on.

I don’t think I’m being that controversial in stating that Pompey have the best keeper in League One. The 19-year-old should be playing high-end Championship football at the very least and I have absolutely no doubt that he will be City’s number one within the next 10 years.

Having studied Championship and lower League football for the best part of 10 years, I haven’t seen a keeper that looks so far above the level. His maturity, age, and sensational ability mean that this lad will go all the way to the top; pretty much every single Pompey fan would agree.

Ireland have themselves a keeper for at least the next 15 years and City have themselves Ederson 2.0 for when the Brazilian is eventually deemed surplus to requirements.

And for now, Pompey have a goalkeeper that could single-handedly push them towards a potential play-off place.