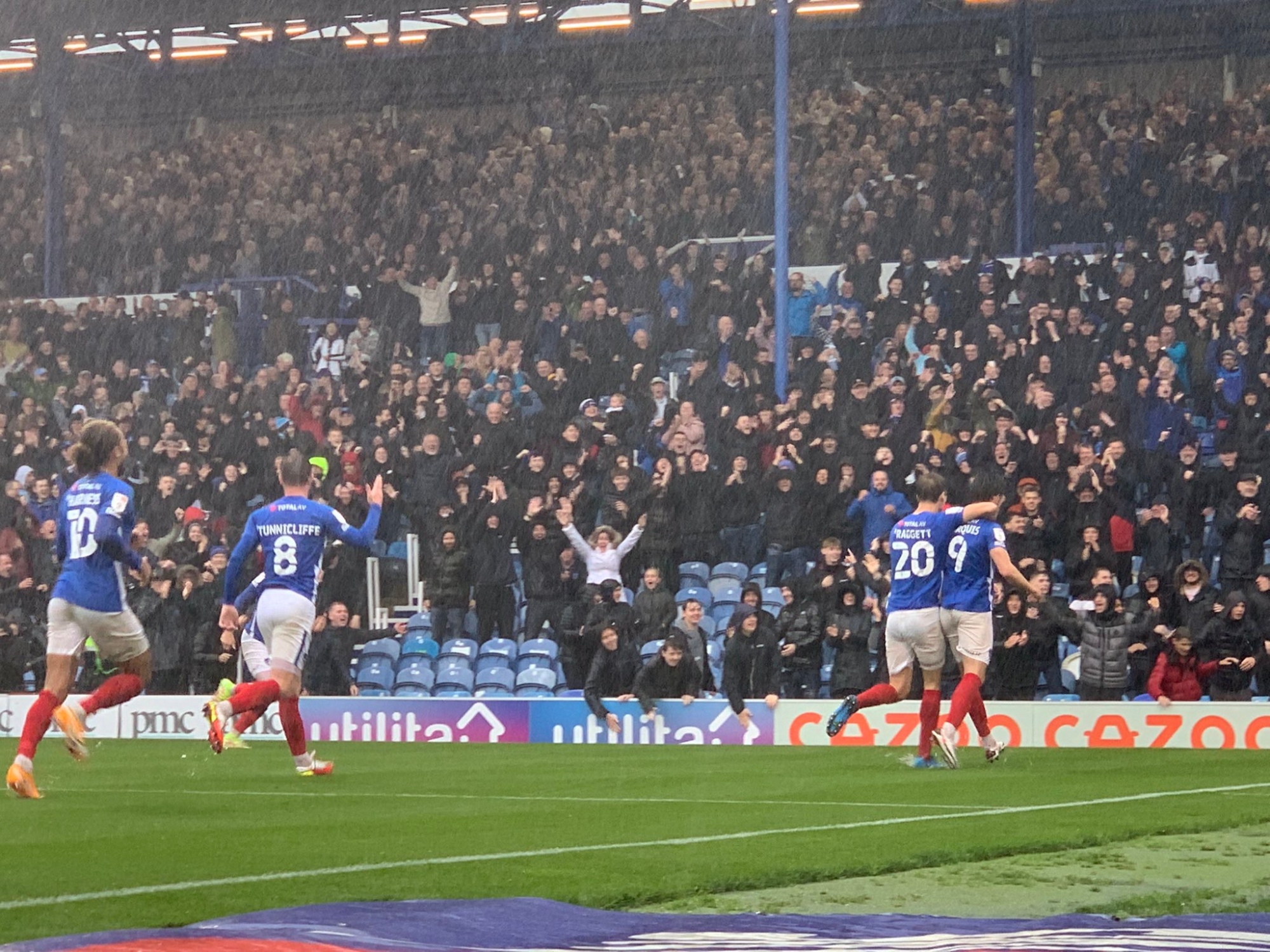 Pompey’s wait to secure a win in all competitions had grown to 32 days by the time that league leaders Sunderland had arrived on the South Coast. Having gone on an eight game winless run, most recently showing up dead-on-arrival at Burton Albion, Pompey were under an expectation to put in some form of response after such a lacklustre showing.

In near Atlantean conditions in the Lost City of Portsea Island, it was the perfect response from all involved of a PO4 persuasion. That ever-growing wait for a win would finally end at the expense of the pace-setting Black Cats; the hosts’ mastery of the conditions compared to the drowning Cats the prime factor in a runaway 4-0 win.

The game started with an uneven blend of skittishness in dealing with the autumnal deluge; and a headstrong spurt of energy from a Pompey side that looked to establish control early on.

From the first knockings, it was Danny Cowley’s unchanged side that appeared more able to play into the conditions, and the more affected parts of the pitch, as opposed to Lee Johnson’s side that made three changes following a 5-0 over Cheltenham.

One particular area Pompey were operating at full capacity with was their left flank. The Lee Brown/Ronan Curtis partnership yielded another goal when the two exchanged passes to get behind Carl Winchester; Brown sauntered down the line before playing it along the edge of the box to Marcus Harness, whose deflected effort found the near corner.

The Blues had the bit between their teeth in a way not yet seen this season, hunting the ball down all over the pitch. That hungry dog mentality yielded the second goal just after the half-hour mark. Having lost possession in the final third, Curtis would win the ball back almost immediately, it fell to Harness whose drive to the byline preceded a low ball into the near post for John Marquis, his expertly-executed backheel found Brown, who stroked it into the far corner.

Sunderland were all over the place. Unable to generate any pressure on the Pompey goal, and often losing the ball in the ponds at each corner of the ground, their afternoon was slipping away. At this stage, the players and staff were complaining about the unplayable nature of the pitch, particularly in the corners. Considering that the opening two goals came down the flanks, seemingly not affecting the hosts, the officials seemed unimpressed with these complaints.

If the visitors were to get this one abandoned, it most likely needed to be a closer game going into the half. Hopes of that being the case were dashed in the 45th minute when Marquis nicked in front of the entire Wearside defence to flick a low Curtis free-kick into the far corner.

3-0 heading into the second half, Johnson’s remonstrations were falling on deaf ears, as his side offered little to no backbone in dealing with the admittedly awful conditions. Such was Black Cats’ inability to swim, there was no question of the Blues protecting the lead merely making sure the game indeed played to completion. The biggest opponent on the day was the weather, and as the pitch continued to suffer, there were fears around the ground of this being all for naught.

Sunderland were in full desperation mode to try and generate pressure, to try and claw a goal back to force the referee’s hand. An extremely high back line, which became a back three following Callum Doyle’s entrance at half-time, were caught out on multiple occasions, but Hoffmann’s interventions kept the scores as they were for the time being.

Eventually, the SR5 outfit sunk again, when Joe Morrell floated a delicious ball into the box for an on-running Marquis. His header was brilliantly saved by Hoffmann, only for the ball to come back to Pompey’s number nine, who bagged Pompey’ number four.

As a contest, the game had ended long ago. All there was to wrap up now were the 90 minutes themselves. In truth, had this been a close game at the half, this game wouldn’t have finished. As it was, only the side being battered was the one complaining. In the end, the mastery of the conditions from a home perspective meant that Pompey secured their first win since August 17th, and their first clean sheet since a week after.

Pompey Can Be A Hungry Dog

It’s something the ERD has criticised this side on multiple occasions regarding its intensity, and rightly so. On that basis, it’s comforting to now praise Cowley’s side on the matter.

When Pompey travelled to Burton, both sides hadn’t won since the same days in August. Yet, only one side looked like it was moving Heaven and Earth to do something about. They earned their victory as a result. Too many times after conceding, the Blues will drop heads and call it a day. To that end, when MK Dons scored the game’s only goal in the 72nd minute, Pompey wouldn’t even manage to have a shot in the final 18 minutes, to try and rescue the game.

The attitude from this side in general has stunk something fierce at times. However, like the Brewers on Tuesday, Pompey declared “no more”. It was a performance that while not brilliant in its technical prowess, showed grit and determination not seen this season by the Blues, and it was totally unmatched by the at-time division leaders. To that end, Pompey fully deserved their victory, and it was promising to see that this team can indeed knuckle down and get on with it, when the going gets rough. Having now set that standard, even in normal playing conditions, they will be expected to show those characteristics again this season.

The League One Carousel Is In Full Spin

It’s only just turned October, and there’s already a delightful chain of teams winning games. Here comes the latest one. Pompey beat Sunderland, Sunderland beat Accrington, Accrington beat Crewe, Crewe beat Burton, Burton beat Pompey, Pompey beat Sunderland. A series of teams that involves both the top two and the bottom four, the “anyone can beat anyone” chain is already picking up speed as the division swirls around its own power dynamic.

John Marquis has been the subject of some heated criticism this season, mostly surrounding his instinct, and his finishing. While a fair amount of said criticism was indeed warranted, it’s also been noted that Marquis still plays an important role in this team. His ability to dive into the channels, receive the ball and offload it has aided the Blues on multiple occasions to date. Two such pieces of movement provided assists in both the Charlton and Sunderland games.

On the subject of his finishing, there are still questions that need answering. His instinct though, was in much better form on Saturday. For his first goal, the run he makes to get past two Sunderland defenders to get to the ball first was nothing such of hell-bent. There was a real desire to get to that ball, and so he did.

The second goal, represented the awareness to ghost between two defenders and push a downward header at goal. While it wasn’t all the way in the corner, take nothing away from the fantastic Hoffmann save, and while the Sunderland defence were flat-footed, Marquis was following his chance in, and duly tucked away number two.

The Irish international can be fired up at the best of times; but this game seemed to be a fever dream for the wide man. Awful conditions, large crowd, big team coming to visit, Curtis looked every bit up for this one. His assist for the third goal and crucial turnover in possession for the second proved his influence upon the game, yet he marred that good showing right at the death.

92 minutes on the clock, 4-0 on the board, Sunderland were in their own territory when Curtis flew in on Winchester to pick up his fifth booking of the season, which signals a one-game for the tricky trip to 4th place Rotherham in two weeks. A needless challenge that excludes from a tough fixture, it was the only negative on a delightful day amidst the deluge.