The score-line does not give the full picture of how good Pompey’s performance was.

The Blues could have scored five in a dominant 2-0 win over Sunderland, which puts them in a playoff place for the first time this season.

If you just look at the text highlights, it looks like Portsmouth were just clinical from set-pieces and shut up shop like usual.

But Kenny Jackett’s tactics are much more astute than they were at the start of the season.

He has facilitated the improved performances of his players, through the right blend of a structured defence and a mobile offence.

Without those changes, Pompey would not have won eight games in a row and have an unbeaten run of league home games comparable with the 1967-68 and 1986-87 seasons.

In the first half, the match was very even and Kenny Jackett addressed this in his post-match interview.

“In the second half though, I thought we stepped on it and deserved to win right from the start of the second half until the end. We were the better team and pleased to say we got the 2nd goal and the clean sheet.”

Sunderland were creating chances through direct passing while maintaining possession through their flexible 3-4-3 formation.

In possession, Sunderland’s 3-4-3 overloaded the Portsmouth midfield and were unlucky to be 1-0 behind at half time.

Jackett’s change to a 4-1-4-1 formation limited this overload. 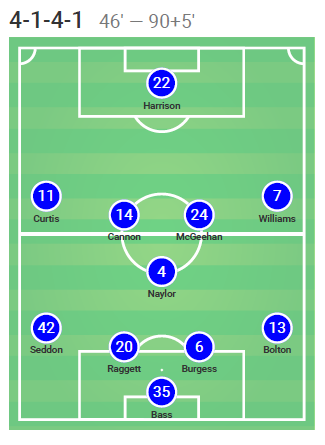 These shorter passing combinations in the midfield also granted both wingers and full-backs more time to focus on creating space off the ball, which spread Sunderland’s defensive line and broke their control in midfield.

Pompey still relied on crossing for most of their chances, but the more patient build up play allowed for those chances to happen, by pushing up midfield line and not giving up possession. 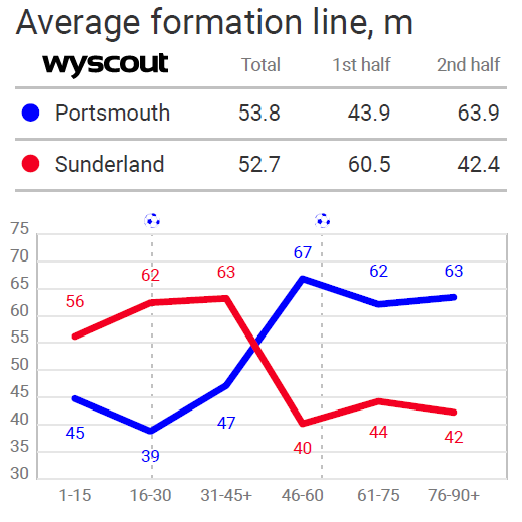 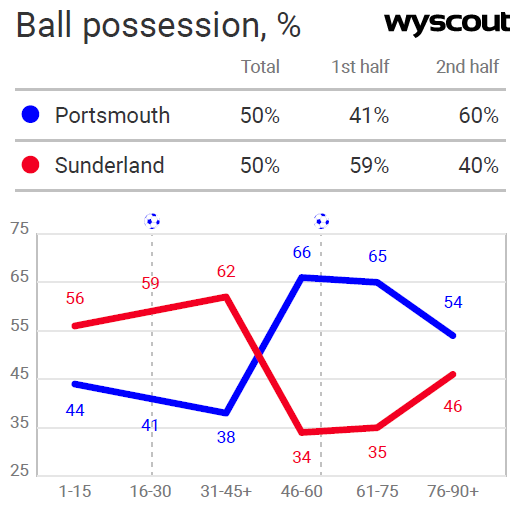 Bringing on Ellis Harrison changed the dynamics of the game up front.

Marquis was not having a bad game but he is not suited to being the lone striker against three centre-halves.

In games like this, a striker’s off the ball analytics and duel stats are hugely important. A duel is when a player competes for the ball when in possession, out of possession or in the air.

For regaining possession and hassling defenders, Harrison is the more effective choice, as he allowed Pompey to retain possession and link up the play with the wingers. 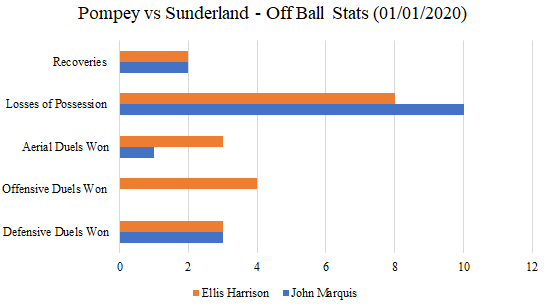 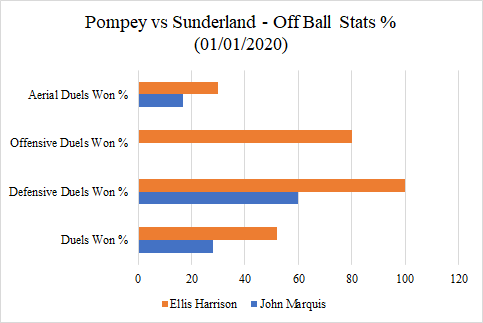 As well as helping his teammates, Harrison had a strong game himself and was unlucky not to score from a header in the penalty area.

With these tactical changes, Pompey controlled the second half, as their creative players were given the freedom to create chances and hassle the Sunderland defenders.

This positive approach was shown through an aggressive high press. Whenever the Blues press more and had a low PPDA number (passes allowed per defensive action), they retain the initiative in games and create more high-quality chances. 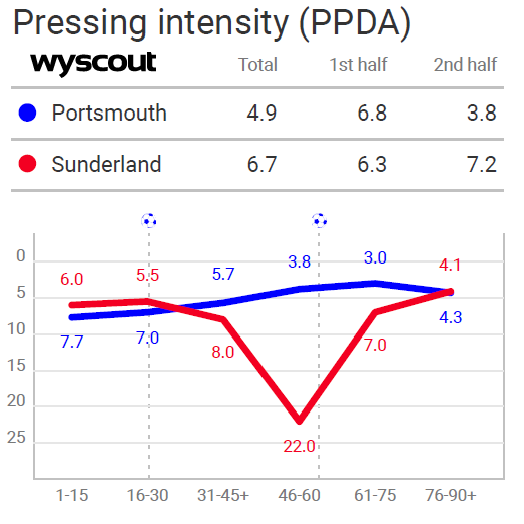 Which forwards stood out

Sunderland were not even close to Portsmouth’s xG (expected goals) throughout the match.

Andy Cannon was at his imperious best at centre-midfield, linking with Pompey’s left-wing to overload the Sunderland defence.

Cannon achieved a 0.95 xA (expected assists) through constant passing combinations in midfield between Curtis and Seddon.

He also made four key passes (passes which lead to a clear-cut scoring opportunity) and made four recoveries in Sunderland’s final third, holding possession and making effective use of it.

This ability to win the ball back and create chances is what Kenny Jackett wants in all of his midfielders, so players such as Cannon and Cameron McGeehan can win the ball upfield and play a direct pass to counter-attack quickly. 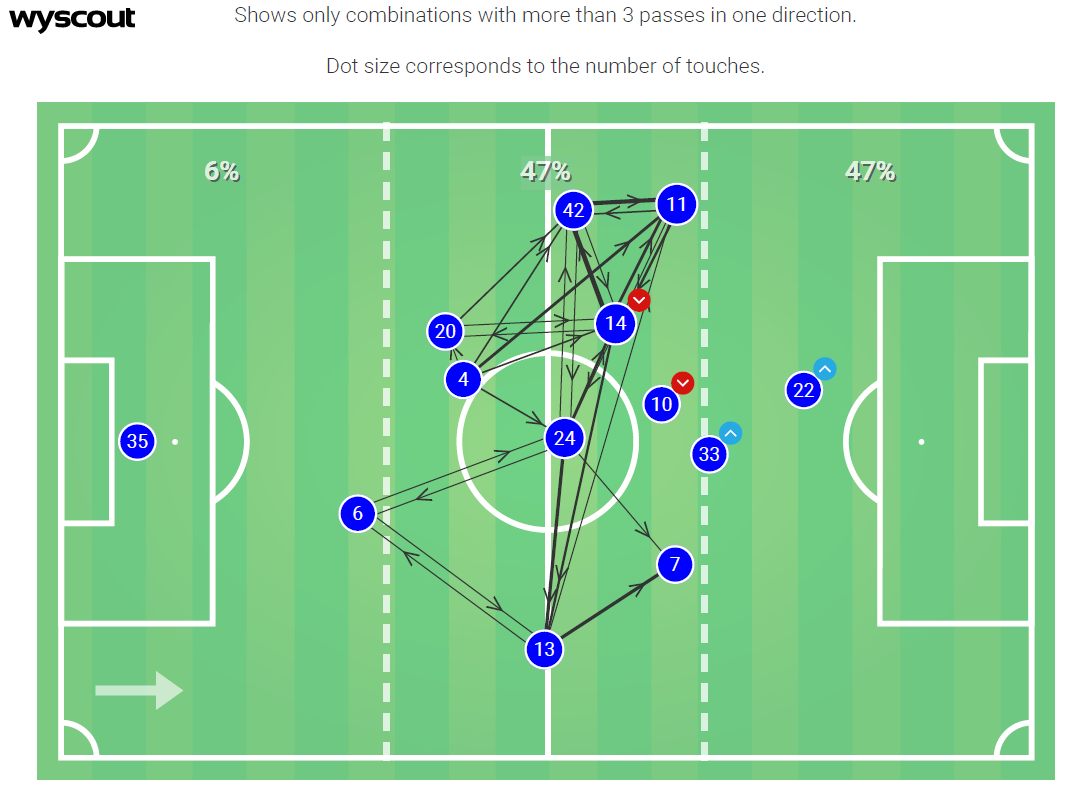 Ryan Williams had an excellent game at right-wing, creating 0.48 xA and having four successful dribbles but failed to contribute more going forward.

For Ronan Curtis, it was another matter. His two assists from set-pieces only paints half of the picture.

His 0.97 xA also comes from the five key passes he made throughout the game and his link up play with Steve Seddon. With Seddon making 11 recoveries of possession high up the pitch, Curtis is given the support to run at defences and put dangerous crosses into the box.

Previously, the wingers would be isolated and forced to play a long pass to the lone striker.

Kenny Jackett said the new players from January allowed for a culture of change in the squad, for his tactics and improved performances.

He said: “The quality of the deliveries has changed, and that comes off the training pitch. We do work hard on it but for the first third of the season, it did not come to fruition. The slightly different dynamics in terms of players has helped us.”

These changes have led to improved performances from players who were previously under fire from the fans.

Out of the cold

Pompey won their 10th clean sheet of the season in a familiar solid, stable defensive performance.

James Bolton had his best game at right-back and did much more than just score from the set-piece.

His defensive qualities are obvious. Having previously played at centre-back for Gateshead, he’s a lot more comfortable with his defensive duties but not as much going forward.

But his performance shows his improvement at going forward, making 3 progressive runs and having a 71% pass accuracy rating. More crucially, Bolton is making more passing combinations between himself and the midfield, so Pompey can make more effective forward passes. 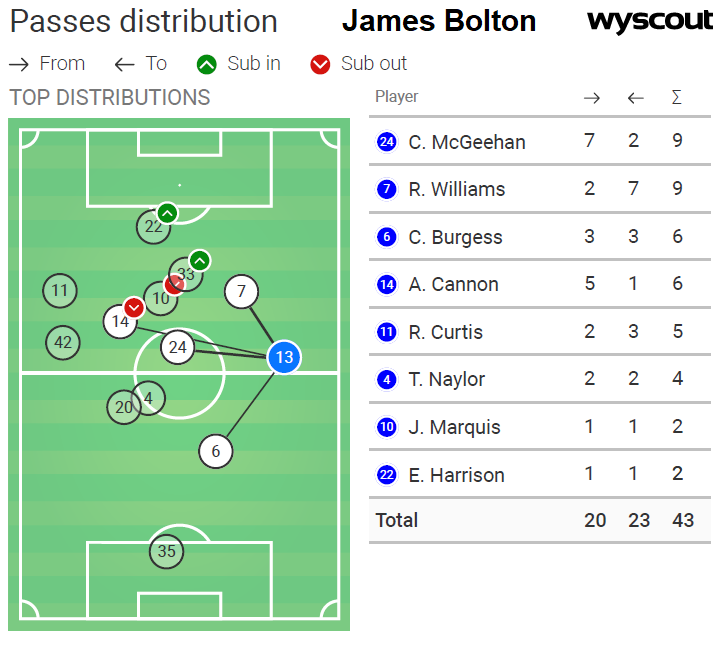 Sean Raggett’s domineering performance also deserves recognition, as he continues to improve his passing whilst being solid defensively.

He’ll never be fully apt at being a ball-playing centre-back, but his 82% aerial duels won and 27 recoveries in possession show he’s suited to Kenny Jackett’s tactics.

Jackett always had faith in both Raggett and Bolton and is delighted their performances have improved.

He said: “Both Raggett and Bolton have put niggling injuries behind them and have got a little bit of rhythm in the last few months and hopefully now, they are both coming into their best form.”

This has been the key for Pompey. The current squad is injury free and Jackett has the flexibility to make more progressive tactical changes.

Again, his changes have led to his players having more composure in possession, pressing when out of position and making the most of the direct passes to create chances. But more importantly, it has got results.

#Jackettball is not to everyone’s taste, but currently, the style of play has got Portsmouth to within six points of 1st place in League One. It was the tactical mistakes and stubbornness at the beginning of the season which frustrated me. Now, Jackett’s changes are being rewarded with results.

With promotion as the be all and end all, that is what matters most.

#Pompey have completed the signing of defender Zak Swanson from Arsenal for an undisclosed fee.
Danny Cowley says there’s “nothing in either” regarding #Pompey’s rumoured interest in Alfie Rutherford and Sam Smith.
FT: @officialborough 1-0 #Pompey
#Pompey starting XI at Gosport: