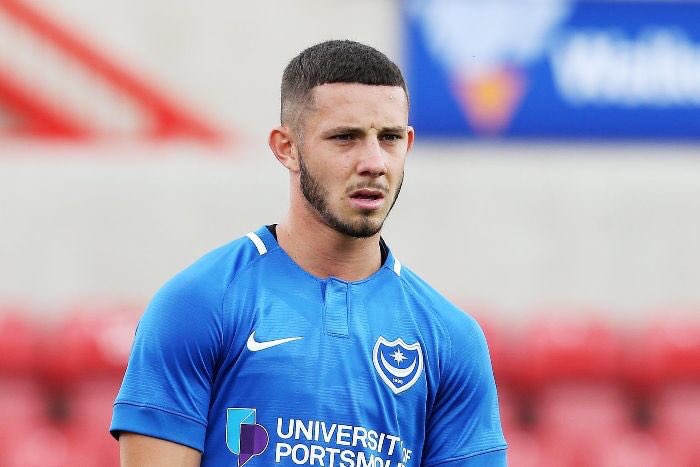 Hugh: Can you tell Pompey fans a little about your work with Port Vale? How did you go from Coventry supporter to working in media for Vale?

Matty: As an avid Coventry City supporter, I travelled home and away to every game before joining Port Vale, and blogging saw me make my first foray into the career that I’m now pursuing.

With a love of football and a passion for writing, I thought it would be a good idea to combine the two and my blog was born. Due to my commitments now that has since fallen by the wayside, but I did make the final of the Football Blogging Awards three years in succession which I’m very proud of.

Now in the final year of my Sports Journalism degree at Staffordshire University, I’m reaching a pivotal stage in my journey. I have been in the media department at Vale for two years now, so I’m responsible for various things such as social media output, interviews and matchday coverage.

When I started out as a blogger I never imagined I’d be doing this, and I’m now in a position that allows me to work with professional footballers. It really is a superb environment to be in, but I’m taking each day as it comes.

Hugh: How long have you been supporting Coventry and what got you into the Sky Blues?

Matty: Remarkably, my first City game was a 4-1 win over rivals Aston Villa, but it’s safe to say I don’t remember any of it considering I was only two years old in February 1999! However, I’ve had an affinity with the Sky Blues since I was a toddler, which I often get tormented about by family members.

I started going regularly when I was around 13 years old and between 2011 and 2016 I rarely missed a fixture, regardless of distance. You couldn’t even put me off going to the pre-season friendlies at the likes of Newport County and Norwich City – I’m bonkers for it.

We played you guys in a friendly once at Havant & Waterlooville back in 2015, and I even made the journey down for that one! With regards to what got me into watching Coventry City, it’s just the fact I wanted to support my local team.

Nothing beats seeing the same folk week in, week out, backing their team come rain or shine. We’ve had it tough for a while now, as have you guys, but we both have loyal fan bases which are fantastic. I’d much rather go through the torture we’re embroiled in as opposed to being an armchair fan.

Hugh: It has been a decent season for Coventry who currently sit 8th in League One. Does this match the fans expectations at the start of the season?

Matty: Given the fact that we only returned to the third tier via the League Two play-offs last season and with the off-field shenanigans still rife, most supporters would’ve been happy with consolidation, so we’ve done well to even be in with a shout for a top six spot.

We have a superb manager in Mark Robins and the turnaround in fortunes since he returned have been nothing short of remarkable. From relegation to two Wembley triumphs and a host of joyful days on the pitch, it’s been more enjoyable supporting the club of late, yet all that hard work could still be undone due to decisions behind the scenes.

Considering the unique problems we face and the fact we could be homeless (again) next season, I think the manager has done excellently to keep the focus of the players solely on football. If the mess can be sorted, the potential of this club is huge, but I just hope we get the opportunity to fulfil that.

Hugh: Coventry are still in the race for the play-offs, especially with Doncaster losing against Sunderland. Do you think Coventry still have a chance of squeezing into the play-offs?

Matty: It’s not over until the fat lady sings! There’s no doubting that plenty of things would have to swing in our favour for us to nick the sixth spot, and we’d have to win all of our remaining fixtures to be in with a realistic chance of achieving that.

Some of the football we’ve played has been fantastic and it’s great to know that we have the youngest squad in the division, but that inexperience has been our downfall at times and we perhaps should be higher in the table already.

We’ve responded well to playing the top teams in the division and you’ll have to go a long way to top that 5-4 victory at Sunderland (I’m sure you loved it too!), but it’s the missed opportunities against the lower-ranked opposition that could ultimately cost us come the 5th of May.

Hugh: Conor Chaplin is the main topic of discussion with Pompey fans ahead of Monday’s game. Are Coventry fans happy with the former Pompey striker?

Matty: Replacing the 28 goals that Marc McNulty scored for us last season was always going to be an almost impossible task, and Conor Chaplin hasn’t exactly set the place alight during his first year with the club. However, I really do believe he will come good and I have faith in him to stand out in 2019/20.

Having interviewed him before at a supporters’ meeting, it’s clear to see he believes in himself, and that’s half the battle with strikers. If he can get a consistent run in the side alongside a strike partner that suits him, he really could flourish.

Maxime Biamou is the man that created many of McNulty’s goals during the promotion-winning campaign, but he’s been out for the last seven months with an ACL injury. His return could be just what the doctor ordered for Chaplin, and I’m intrigued to see how those two links up should both be City players next term.

Hugh: Who are the main Coventry players except Chaplin Pompey fans should worry about?

Matty: Tom Bayliss would’ve been an obvious answer, but he’s currently out with a broken wrist. However, another of our midfielders is very capable at this level, and that’s Liam Kelly. He’s donning the captain’s armband at the moment, and he’s doing the role justice with some dominant performances in the middle.

Jordy Hiwula and Bright Enobakhare are very capable of causing damage in the final third, with the latter proving to be a real favourite having joined on loan from Wolverhampton Wanderers in January. If we could acquire him on a permanent basis, that would be a real statement of intent as he’s a very gifted footballer.

Defensively we have some talented lads too, most notably Dujon Sterling who is of Championship quality at the very least. The 19-year-old will be a contender for Player of the Season, and his parent club Chelsea will be very encouraged by his progress. Dominic Hyam is also one to watch with his ability to play out from the centre of defence.

Hugh: If you could steal two players from the Pompey squad, who would you choose and why?

Matty: Brett Pitman is the first name that springs to mind when I think of Pompey and he’s a proven goal scorer, so I’d take him. Maybe if he was a City player, we’d be in the top six or maybe even the top two right now, who knows?

The other would have to be Jamal Lowe due to the threat he possesses with his pace and power down the flanks. Having scored 16 goals in all competitions as well this season, he’s in scintillating form and I’m sure there will be Championship clubs sniffing around if Portsmouth doesn’t manage to seal promotion.

Hugh: How has Mark Robbins set up tactically this season? Would you do anything differently?

Matty: He’s been playing a 4-2-3-1 system recently and it’s been working, with Jordy Hiwula, Luke Thomas and Bright Enobakhare proving to be a real handful in the final third alongside Amadou Bakayoko who has won fans over with his presence up top.

Since returning to the club, Robins has tried to implement a blueprint that he wants the club to be known for, and that’s playing pretty, expansive football. He encourages his players to take risks in possession, and I’m a big supporter of that.

It can sometimes be dangerous and we perhaps need to be more direct sometimes when teams park men behind the ball, but we’ve been a pleasure to watch on most occasions this season. Long term, I think it’s the correct way to go about our business.

Hugh: Lastly, what is your match prediction?

Matty: More out of hope, optimism and desperation, I’m going to go with a 2-1 win for the Sky Blues.

One thought on “The Opponent: All About Coventry”