Like many of Pompey’s performances this season, the team battled hard and claimed all three points whilst not performing at their best.

The win at the Pirelli stadium continued Pompey’s exceptional away form. Out of 22 away games, Pompey have won 13 of them and drawn 5.

Despite being second best in many areas, the players showed excellent grit and determination to steal the win and continue their chase for automatic promotion, in front of me and the rest of the exceptional travelling supporters.

Like many games this season, Pompey’s back four were the best players on the pitch.

Burton had more of the possession and attacking impotence, especially in the first half.

Pompey’s deep defence and midfield counteracted this, limiting Burton’s scoring chances. Most of the Brewers attacking runs and shots were limited to the middle of the pitch and from long range.

Clarke, Burgess and Naylor were able to soak up play and distribute the ball to the wide areas. Nathan Thompson was also crucial in partially limiting the play of Burton stalwart Lucas Akins and with Lee Brown, supported the wingers going forward.

Conversely, the midfield dropping deeper isolated Portsmouth’s front three. Similar to other games this season, Hawkins was left isolated without any out-ball options.

Multiple times, Hawkins won an aerial duel from a direct ballbut had no one in support, limiting Portsmouth’s ability to maintain possession going forward.

Kenny Jackett loves to rely on the back four, often too much. Every defender played well but it took only one lapse of concentration for Liam Boyce to equalise for Burton.

Although, without the defence’s resilience and concentration, Portsmouth wouldn’t have had a chance to snatch the win in injury time.

The Final Third – Potent but not consistent

Pompey’s attacking play was textbook from their previous games this season; exploiting the wide areas using the full-backs and wingers to supply crosses for the players in the penalty area or on-rushing midfielders.

Ben Close’s opening goal was a good example, scoring from just outside the penalty area after Nathan Thompson regained possession from a clearance.

Despite the opening goal, Pompey had relatively few chances throughout the game. Long balls to Hawkins from defence didn’t work and Jamal Lowe was also marked out of the game.

Kenny Jackett hailed his substitutions for making a difference in the 2nd half.

The introduction of Bogle and Morris made the team more mobile moving forward but both players struggled.

Curtis looked much sharper than previous games and was pivotal for the winning goal. Again, Portsmouth showed only patches of their fluid, counter-attacking football they’re capable of.

Although, at this point in the season, winning football matches is all that matters.

Pompey got a huge stroke of luck for the winning goal.

Many referees would have given handball against Nathan Thompson; inadvertent or otherwise.

Considering the issues Pompey had during the game and lack of clear-cut chances, a 1-1 draw would have been a fair result.

Nonetheless, Pompey played like a team who have been top of the table all year. Even after an imperfect performance, the players dug in, never gave up and took their chances when it mattered. 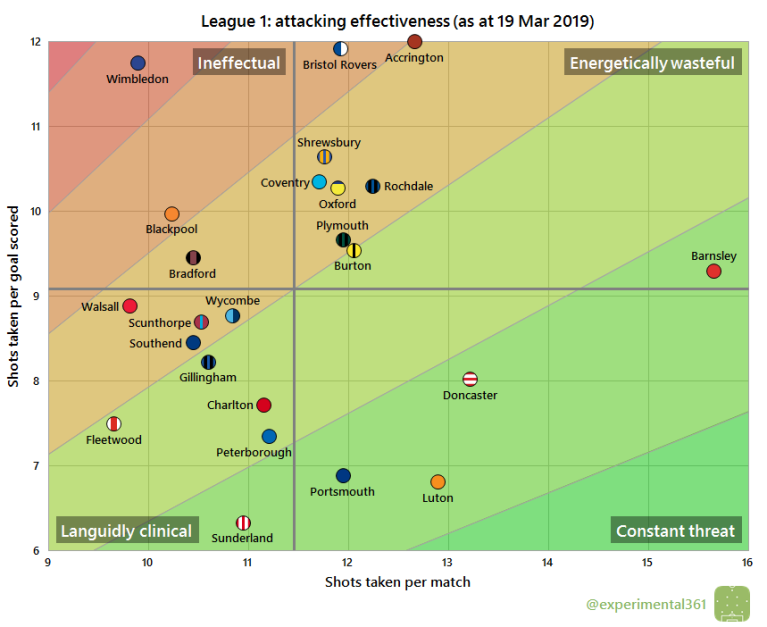 At times, Pompey do not dominate offensive play but do take their chances. Considering the mentality of the Pompey players, in this game and throughout the season, I am not surprised.

The players never gave up despite the game not going 100% their way and responded exceptionally to the 1000+ fans in the away terrace. Both the players and fans deserved the lucky break with the handball decision.

With this mentality, it is unsurprising that Pompey are one step closer to potentially getting automatic promotion.