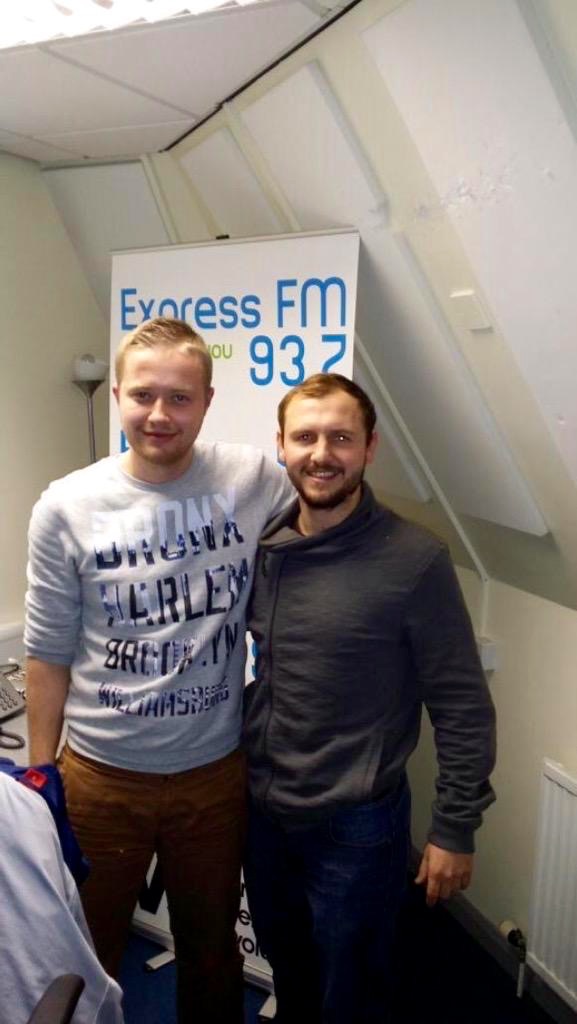 It’s back! Another season looms, so tell us how you’ve been spending the close season Sam?

I’ve been winding down by spending valuable time with the family and friends. What people might not realise is that the break before pre-season is as much as a break for journalists as it is for footballers so its important just to chill out with loved ones.

Great news that GRFS is back on Express FM every Wednesday from August, what do you have in store for listeners?

I’m relishing my third season with Express FM; in particular the Grass Roots Football Show and I’ve very much enjoyed guiding the show over the years to what it is today as a producer and host.

This upcoming season will see the addition of around the grounds reporters where each week reporters will be at games to gather content as well as keep tabs on all the action. They will then join me on the show the following Wednesday to discuss the game as it panned out as well as airing any of their interviews with managers or players.

GRFS also sees the return of resident pundit Shaun Wilkinson and myself so we very much look forward to continuing to build up the show and take it further up the spectrum. We are hoping to kick off Wednesday 12th August and will confirm for definite soon.

What we have at Express FM is an all round fantastic football coverage from Pompey Live to GRFS and I feel what we offer the local football scene is that of a Football League level so it’s vital clubs like Havant, Gosport, Petersfield and so on, continue to benefit from our coverage.

The Pompey Academy has seen Whatmough, Chaplin, Close and May all breakthrough into the first team. Do you miss covering the Youth games and who should fans look out this season?

Those were very fond memories of mine getting up at the crack of dawn go get coverage ready for Academy games and paved my career in the right direction. Sadly now, I don’t have the time to cover the Academy and there was a lack of demand for the coverage, hence why I’ve not brought in anyone else to cover their fortunes.

As you may have heard, Brandon Haunstrup was giving a first-team deal but I imagine he will be given a loan-stint elsewhere.

I’ve seen the likes of Jack Whatmough and Conor Chaplin and they always stood out in my mind. So did Brad Tarbuck, so when I heard the news of his departure, I was gutted for the lad.

I imagine the young keeper Alex Bass will be one name that will be on that first-team sheet one day,  as he’s still very young and has been an excellent talent for the Academy over the years. He’s big, strong and is hungry to play professional football.

Can Pompey Ladies make it their season and achieve promotion to the FA Super League?

It was a great season for Pompey Ladies last term and they showed great resilience and character to battle it down to the wire, fending off stiff competition from Brighton & Hove Albion women.

It’s arguably one of the greatest moments in the club’s history and everyone should be very proud of what was achieved on and off the pitch. Last year was the perfect tribute to president Dave Coyle who stepped down due to ill health and everyone is wishing the very best of recoveries.

You have to respect how Mick Williams has come into the Ladies as the new chairman with a vision for the club and with his experience he gained with the men’s side, it can only pay dividends.

Whether Pompey Ladies can challenge again next season is another matter, but basing what happened last season, if they continue to show the togetherness, the character and most importantly grind results out on the pitch, they will have a very good chance of regaining their crown.

I’m sure people will have tuned into the Women’s World Cup out in Canada this summer and that will only raise the profile of the game so expect more fans to pay close attention to Pompey Ladies. Fingers crossed they can win their play-off final if it comes to that this time and ply their trade in the Super League.

The local football scene has gone from strength to strength in recent years, what’s been your particular highlights?

The local football scene continues to come on leaps and bounds and you won’t find too many cities that have such an undying passion for football as Portsmouth does. That is echoed from Pompey all the way down to grass roots level. You only have to look at all the local clubs in the football spectrum in non league to see how closely competitive it is.

My favourite moment over the past three years has to be when Gosport Borough came all the way from Privett Park and made it to Wembley Stadium for the FA Trophy Final last year. Despite the result, it was a terrific day that was enjoyed by all and may be something we won’t see again for quite some time. Walking out for your local club on the grandest stages of them all will have been a dream come true for the majority of the Boro’ players. It’s something that some of them may never get the chance to do again.

Plenty on offer locally with Hawks & Gosport Borough in the National League South, newly promoted Petersfield Town in the Southern League Central, AFC Portchester, Moneyfields, Fareham Town, Horndean & US Portsmouth in the Wessex League. Who are you most looking forward to watching and why?

I’m particularly looking forward to seeing how Petersfield adapt to playing in the Southern League Central following back to back title triumphs in the Wessex League. Ian Saunders is an exciting young manager with a fresh outlook to the game. He has showed plenty of faith in his players with great discipline and that has been backed up on the pitch. There’s a terrific team morale in the camp and I cross every part of my body hoping The Rams can challenge in the SLC.

Another team I’m looking forward to watching is Lee Bradbury’s Havant & Waterlooville. They only missed out on the play-off final last season following defeat to Boreham Wood so it will be interesting to see with the new additions in the squad, whether the Hawks can challenge for promotion once again and perhaps go all the way!

What are your pre-season thoughts on the Puma Engineering Hampshire League Senior Division? Baffins Milton Rovers, Clanfield, Paulsgrove, Liss Athletic, Fleetlands, and Liphook United amongst the teams in our area.

It’s a competitive league and it’s a shame Baffins missed out on promotion to the Wessex League in the end considering the improvements to their ground. The season before last, Baffins missed out on promotion despite winning the league but the ground was not deemed to be the right standard for the league above. They can only use the past two seasons as an inspiration to go all the way this time round and go all guns blazing to steam past the opposition. If they can keep their danger men fit this season, then I see no reason why they can’t mount a serious title challenge.

Liss as well were rejuvenated towards the end of last season when Rich Bessey took over the managerial reigns at Newmans Collard and steered them away from relegation. That was crucial for local football as the more clubs we have at semi-pro level, the better for the younger generation who aspire to wear the Pompey shirt one day in front of the Fratton Faithful.

Thanks Sam, good luck to you and the team for the new season with GRFS on 93.7 Express FM.