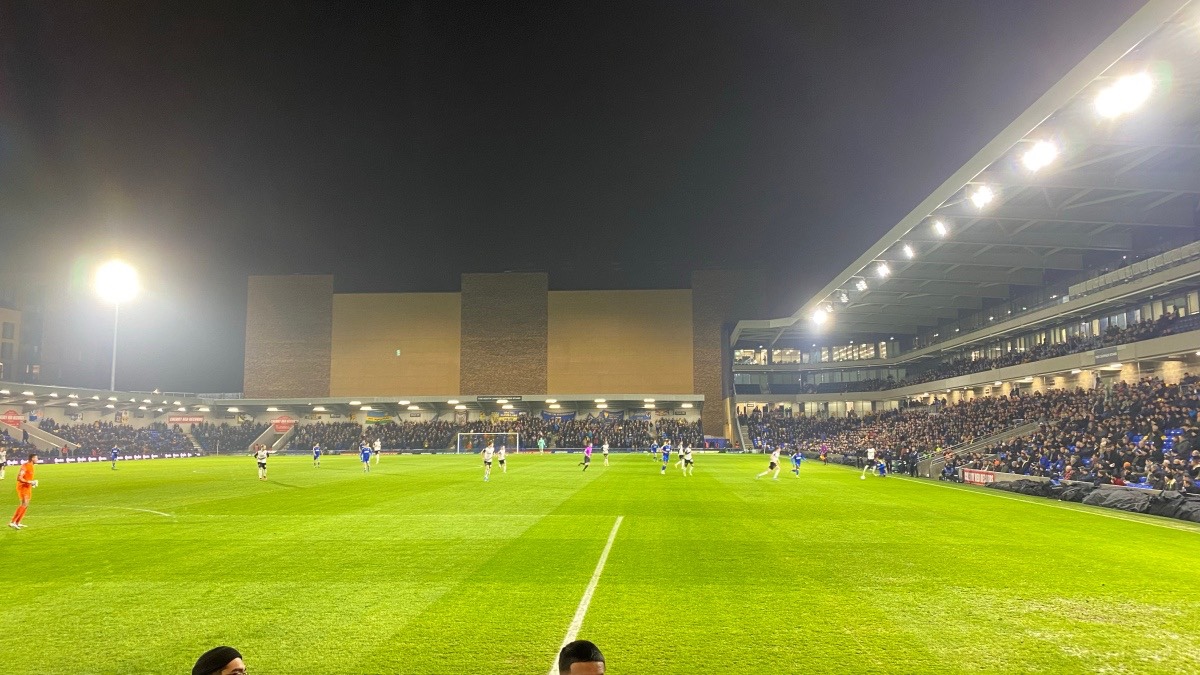 Pompey headed to the capital to try and find their first league win of 2022, having previously drawn at Cambridge United, and losing at the weekend to MK Dons. The defeat to the other Dons brought an end to the ten-game unbeaten run, and as such the Blues were looking to get back on the horse.

Instead, in what was their fourth midweek away game in just 18 days, Danny Cowley’s side served up another tepid showing of football, as both sides stumbled through an ultimately underwhelming evening in SW17. A scoreless draw was as fair a result as one could expect.

Debuts were handed to loanees Hayden Carter and Tyler Walker; while Louis Thompson and Lee Brown also earned starting spots. Jack Rudoni nearly gave all involved a nightmare opening, when he forced a smart save from Gavin Bazunu after just two minutes. The hosts came close again when Cheye Alexander’s scrambled effort from a corner was cleared off the line by George Hirst.

As for Portsmouth, unconfirmed reports do suggest that they did at some point make it into the Wimbledon half. This is still being investigated.

Taking into account that shots on target aren’t the only metric by which one can measure the entertainment and quality of a game, on this occasion that is exactly how to measure the first half. Rudoni’s palm-stinger and Alexander’s header were the only first half shots on target. With the visitors recording none, each side played an opening 45 littered with hoofball antics, niggly fouls, and abject losses in possession.

Where the Blues were languid in the first half, they were lively right after the restart. A long Joe Morrell ping outside arrived to Mahlon Romeo in space, and his ball in was diverted to the near post on the angle by Walker, with Nik Tzanev in the home goal getting down well to push it wide.

As the second half wore on, the Dons became more sporadic in their forays forward, while the visitors sought to find ways to break down an ever-deepening backline. A Mahlon Romeo daisy-cutter failed to test Tzanev, before another effort from the wing-back from 30 yards doinked off the top of the crossbar. The gloveman would come up huge to preserve a point for his side when a Shaun Williams corner met the head of Sean Raggett six yards out, only for the Kiwi to parry it away with most of the away end already celebrating.

The last few minutes played out in relative obscurity, neither side creating that one last chance to go out and win it. The points were shared, the goal nets remained unruffled, and neither fanbase could feel aggrieved about that.

Pompey Need To Start At The Start

Through four away games so far in 2022, the Blues have been a non-entity for the most part, especially in the first half. Four first halves played, just two shots on target in 180 minutes of football. Wimbledon marked the second time this year that Cowley’s side has entered half-time without registering a shot on target.

Prior to Christmas and the Covid postponements, Pompey were rightly being praised for being a side that could consistently create opportunities throughout games, a hallmark of their ten-game unbeaten run. Since their return to action, regular action at that, that hallmark has disintegrated entirely. There is now a growing appeal to the idea that fans of a PO4 persuasion could show up just in time for the start of the second half, and not miss anything.

It is the peak of foot-shooting that your side is constantly playing catch-up in games, or trying to win a full game of football in just half a game.

The Midfield Has Disappeared

The inability to create chances, to gain footholds in opposition territory, partially why it felt Tyler Walker hasn’t actually made his debut yet, has to in part stem from the reality that the midfield corps of Pompey has failed to show up this year.

Including the victory over League Two Exeter City, both goals for the Grecians came via sauntering through the combination of either Morrell/Azeez or Morrell/Thompson. At the risk of committing a most holy crime, Joe Morrell and co. have simply not influenced games at all since Auld Lang Syne was belted out. Teams can walk right through the middle of Pompey’s team at will, while it takes far too long for the middle men to establish anything on the ball.

The draw at Wimbledon, especially the first half, was a case study in passes sold short, a complete inability to generate flow of play, and in the end isolating the forwards. Much of what the fans have been subjected to involves an east-west procession between the back five, before a hopeful ball up the line is sent. Eventually, they do get involved and begin spraying the ball around with more conviction, but this needs to occur a considerable amount of time before the 60th minute, itself an extension of the above point.

Hayden Carter – 7 – Very composed on the ball, not afraid to assert himself in a challenge. Dotted the game with a couple key headers.

Sean Raggett – 7 – Didn’t always have the beating of Ollie Palmer early, but grew throughout the game.

Mahlon Romeo – 6 – Had his pocket picked on too many occasions, but became a Dons headache in second half.

Lee Brown – 6 – Tried to make inroads, had more threat when linking up with Curtis.

Joe Morrell – 5 – Non-existent first half, picked his passing up a bit later on.

Louis Thompson – 4 – A forgettable evening all-round, turned the ball over too often.

Marcus Harness – 5 – Moved around as his usual self, but no product when on the ball.

George Hirst – 5 – No impact, but for those behind him, not entirely his fault.

Tyler Walker – 5 – One flashed effort, but quiet outside of that.

Ronan Curtis (on in 66th) – 6 – Tried to make things happen with Brown, but not much came off.