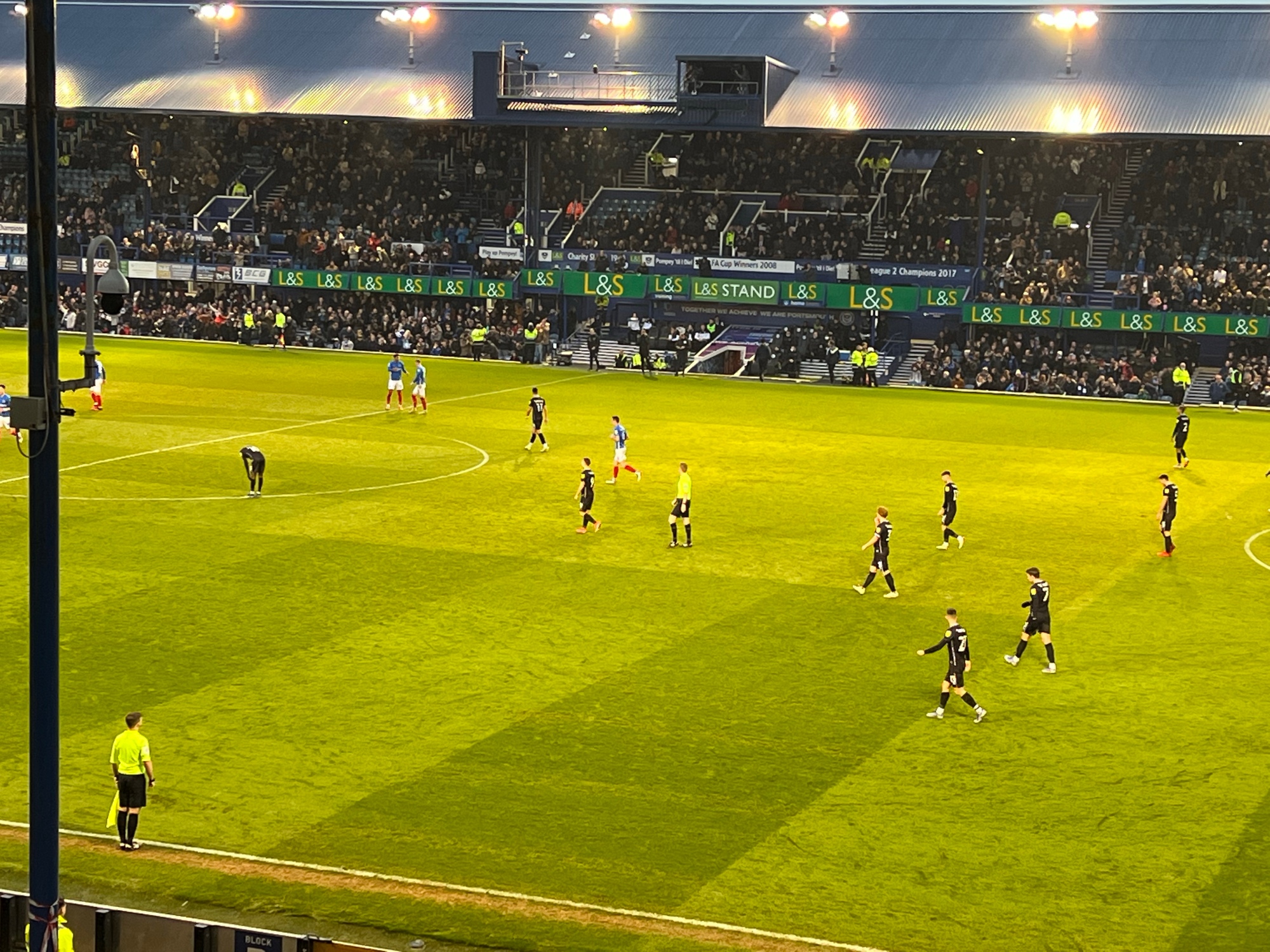 Pompey have had to endure three away games in 2022 prior to returning to Fratton Park. Trips to Cambridge and Exeter preceded a PO4 affair that’s not been a feature since December 10th, the 2-0 victory over Morecambe.

The first side to send its coach down Eastern Road in the new year was an MK Dons side looking to consolidate its playoff places. In the end, the Dons recorded their second victory over the Blues this season, putting an end to the ten-game unbeaten run that had been in effect since the draw at Accrington in October.

The opening exchanges were largely in favour of the hosts. The Dons were unable to ask many questions while building from the back, the more direct Blues letting loose for goal on occasion. Connor Ogilvie swept a Sean Raggett knockdown headed over the bar from close range, and Ronan Curtis was the first to force a save from the new shot-stopper.

An afternoon thematic of shooting themselves in the foot, the first instance came 20 minutes in. Reeco Hackett had done well to wriggle his way out of trouble, only to see a loose pass inside picked up by Matt O’Riley. One well-weighted feeder to Mo Eisa, and the result was a cool finish into the far corner.

Foot-Shooting Shambles Pt. II occurred on the stroke of half-time, when Kieron Freeman’s overzealous challenge/back pass was pounded upon by Scott Twine, easily shrugging off Sean Raggett. His effort was blocked, and the rebound was dispatched from 20 yards by Corbeanu, smacking his half-volley off the underside of the crossbar.

The second half was mostly one-way traffic as Pompey desperately tried to claw their way back into the game. The Dons at first seemed comfortable with a more reserved approach, but as momentum continued to shift to the home side, the visitors soon fell into siege defence. A combination of delicious Harness and Ogilvie deliveries failed to be met by any instinctive runs into either post, and the frustration wore on.

Corbeanu threatened to end the game as a contest when he traversed the length of the field, his eventual effort being palmed away by Gavin Bazunu. The Blues took that latest warning sign to heart, scoring within a minute. Freeman’s untracked move into space on the flank saw him receive a pass from Mahlon Romeo; his cutback swept home into the far corner by George Hirst.

Another roguish effort from the visitors, this time courtesy of Dan Harvie, cracked the crossbar as MK once again looked to finish the contest. A smattering of efforts from the hosts scattered the end of the game, including a John Marquis effort that was disallowed for offside deep in added time; and so the unbeaten run came to an end.

Let’s get it out there straight away. Pompey have put in considerably poorer 90 minute showings and won this season (Fleetwood, Shrewsbury, Gillingham to name a few). For the most part, they had stifled the Dons ability to build from the back. To that end, the Dons only had one shot on target in the first half outside of their two gift-wrapped goals. Also to the tune of 22 shots, they got at that Dons back three throughout the game.

This was without a doubt the best showing Pompey have put in when ending up with zero points in a game. It’s probably the only game that they have lost in which they had a constant presence in the affair. Unfortunately, that doesn’t matter. What matters is the scoreboard come the final whistle; and two archetype cases of self-destruction turned what could have been a big victory, into a tough defeat.

The Reaction Was Very Overblown

Fourth wall breaker: I understand there’s a spectrum of opinion. Many seem to appreciate my takes on matters both on-field and off-field, and on the other side I on occasion am labelled a pessimist, a moaner, etc etc.

If you’re one of the people who joined in the raucous booing of the side at half-time, don’t even think to come at me with those latter comments again. I get it, your side is 2-0 down at home with half a game played, but the booing was ridiculous. That Pompey performance wasn’t even the worst performance this week. Despite the score, it was the best showing so far in 2022.

I know I know, it’s a results business. In the context of recent league form, it’s Pompey’s first defeat in 11 games, nearly a full quarter of the season. Given that the home side were also very much in the game despite the calamity defending, the booing was harsh at best.

Gavin Bazunu – 6 – A couple of important saves at the end kept Pompey alive.

Kieron Freeman – 5 – Despite an assist, he was caught out for the first goal, and created the second goal.

Sean Raggett – 6 – Outmuscled too easily for second goal, but was solid outside that.

Connor Ogilvie – 6 – Has to score early on, but deserved an assist from either of two surprisingly good deliveries.

Mahlon Romeo – 7 – Worked the space out wide in the final third well.

Joe Morrell – 6 – Moved the ball around with purpose, but nothing too incisive.

Shaun Williams – 4 – Sloppy on the ball, a veritable ghost off it.

Marcus Harness – 7 – One of the chief creators. Should have walked away with one, if not two assists.

George Hirst – 6 – Put Pompey back in touching distance, but will want some other moments back.

Ronan Curtis – 5 – Squandered key chances in the first half.

Louis Thompson (on in 64th) – 6 – Added composure on the ball, apart from a really poor effort in the box which sailed wide.