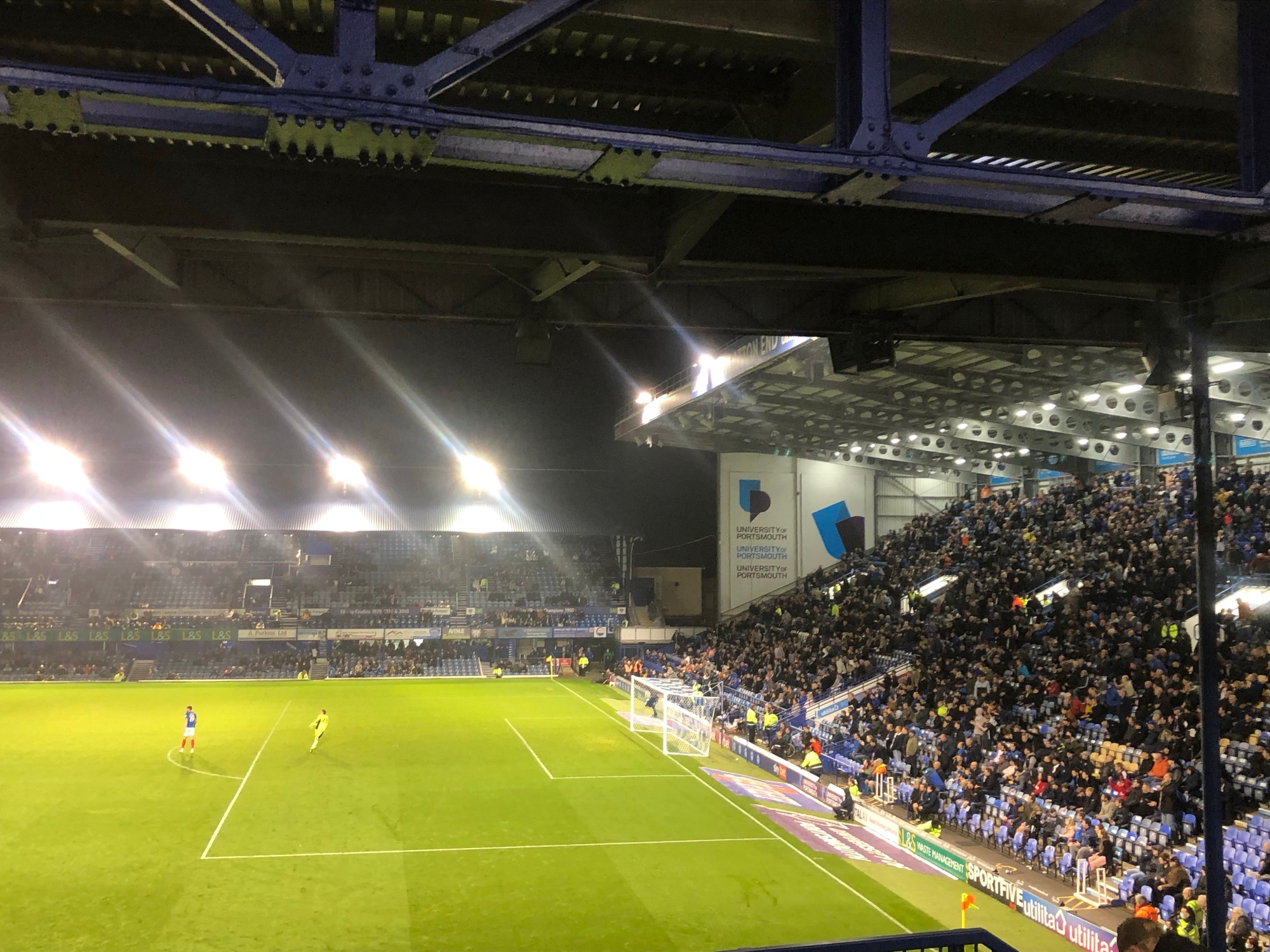 Not a typo, but a reference to the ancient Italian city flattened by the untamed wrath of its neighbor Vesuvius in 79AD. The question at this time is: Who is the volcano in this modern day scenario that destroyed Pompey/ii? Is it this group of players, the management duo, or indeed those who wear the suits and sit from upon high, offering the fans their occasional PR-dressed crumbs of deflective exposition. Right now, could they all be the volcano?

To contextualise this odd opening, Pompey returned to PO4 following a dismal 4-1 defeat at the hands of Rotherham United, to a place where they had suffered a solitary defeat prior to the arrival of Ipswich Town, themselves with a solitary win on the road. A response was needed following the capitulation in South Yorkshire, and so the fine minds of the Blues dressing room applied themselves to concede four goals for the second game running, while netting a zero in return. It’s a result that drops Danny Cowley’s side to 17th in the League One table.

Best bit about tonight was this and the timings being perfect😂 #Pompey pic.twitter.com/KSSt97tKcB

That’s all the review this game deserves. A cowardly and incompetent display permeated the ninety minutes at Fratton Park, featuring another second half collapse worthy of every single boo and sarcastic chant it got. So, it’s straight on to…

This Is Your Lot

This is the Pompey of the now. Certain figures within the club claimed this was a “first rate” squad that had been assembled for the 21/22 season. At this stage, one must wonder is this is a great con, or great incompetence. Here’s the truth. This is Pompey now.

There is no first rate squad, there is no progress. There is a yearly carousel of bumbling from a middling League One squad to a slightly decent League One squad, back to a middling League One squad. The answers the fan base have received and will receive will blame external factors for hampering their ambitions; but the honest, cold light of day reality is that this football club took the season ticket money of thousands, and in return claimed they had a squad ready to go, despite it very much not being the case.

Ultimately, this season was dead-on-arrival, it was clear to see since June surrounding player negotiations, and previously when the club tried to hire just Danny Cowley, and not his brother. This is the kind of penny-pinching that is thematic of an organisation that is content with just existing in its mediocre state.

Hang in there Pompey fans, your hard-earned money and your loyal support will be rewarded with several more months of underwhelming football and platitudes, and next year you shall get to gamble that money again on the basis that this club might effort itself to end up in a playoff semi-final against Barnsley.

It’s Being Phoned In

Forget the whole “play for the crest” and “play for the fans of this club” romanticisms. A 30-something man born 200 miles away from the club he currently plays for has no fairytale obligation to lay his body on the line in the name of a fan who’s been a season ticket holder for 24 years. In the end, it’s just something trotted out on a semi-regular basis to lift the fans ahead of a big game.

So if players aren’t to give 100% for those in the stands, then why should they play? How about this, it’s your f*cking job. From an objective perspective, a football player is contracted to go to work between two certain time periods, and apply themselves to their place of work to rightfully earn the money associated with said contract. A frustrated fan base will have awoken on Wednesday morning to go to work, to earn money and provide for their families. In this sense, the mere mortals and those who take the field are the same.

On that basis, it’s a slap in the face to see that several, if not most of this side has been guilty on far too many occasions this season of just downing tools and calling it a day. MK Dons (A), Burton (A), Rotherham (A), and now Ipswich (H) are all fine examples of this. Again, never mind the “you need to play for those fans” lark, you need to play football and apply yourself, because it’s in your goddamn contract to do so. If you don’t care, come out and say that. Come out and admit that you honestly don’t want to be in this job anymore. Stop wasting all this time pretending otherwise, and allow a more committed employee to step in. Otherwise, it is advisable that you get on with it what you’re paid to do. You’re not paid to win games, but you are certainly paid to do everything you can towards that end.

Pompey, and Danny Cowley in particular, are currently in a predicament where not only can they not resolve their issues, they’re still struggling to figure out how to stop new issues from arising at the same time.

The Blues boss speculated a return to a back four prior to the game, only to retain the back three/five that has been in play since the Cambridge defeat. Some scrambling changes on occasion, combined with some tepid substitutions, and it’s becoming apparent that Cowley is running out of ideas on how to stop the rot that is spreading like wildfire through this team. It’s not all his own fault. Injuries, budgetary inconsistencies, and stunningly poor performances have forced his hand to a degree, yet the sideline marshal was still responsible for signings such as George Hirst, Gassan Ahadme, and so on. He is also the man that is starting to just throw like-for-like subs into the game.

It’s impossible to understand the identity of this team. There is nothing upon which this side is currently imprinting itself. Intensity? Possession? Transition phases? Pompey have nothing in a game that they’re using as their catalyst. Instead, eleven men take to the field, three more will enter at second half intervals; and a nebulous, disjointed ninety minutes is the product of an outfit that has no plan, no backup plan, and nowhere to go.

Gavin Bazunu – 3 – A nightmare evening, handing Ipswich the opener before allowing two more to squirm underneath him.

Mahlon Romeo – 4 – Energy is fine, but his positioning is too nebulous at times and it forces Freeman outside to become another right back.

Kieron Freeman – 4 – Not as individually poor as he was against Rotherham, more the product of a poor collective effort.

Sean Raggett – 5 – Pompey’s aerial bastion had won eleven headers by the half hour mark, powerless to resist once the collapse took effect… again.

Shaun Williams – 4 – Like Freeman not individually dreadful on the night, just exposed as Ipswich charged the backline at will.

Lee Brown – 2 – Wearing the (C) armband requires one to lead the way, he didn’t. Awful positioning and half-baked efforts in the second half contributed to two further goals coming down his flank.

Ryan Tunnicliffe – 4 – A lost presence in the game, unable to influence anything at either end.

Joe Morrell – 6 – One of the only that leaves the game with credit. Consistently getting the ball into the feet of those in advanced positions all evening, range of passing improving all the time.

Marcus Harness – 2 – A disasterclass in ball retention, including a no-look giveaway pass for the third. Missed the target entirely with a promising early chance. Silly yellow card also.

Ronan Curtis – 3 – Picked up another needless yellow card after coming back from suspension. Like Harness, unable to do much once on the ball.

John Marquis – 4 – Victim of a poor touch and little service, but failed to capitalise when on the ball in space.

George Hirst – 5 – Played roughly half an hour. Had a shot.

Reeco Hackett – 6 – Brought some juice in his 18-minute cameo. Set up Pompey’s best chance of the game.

Connor Ogilvie – 5 – 17 minutes the total, game was a lost cause at that point.