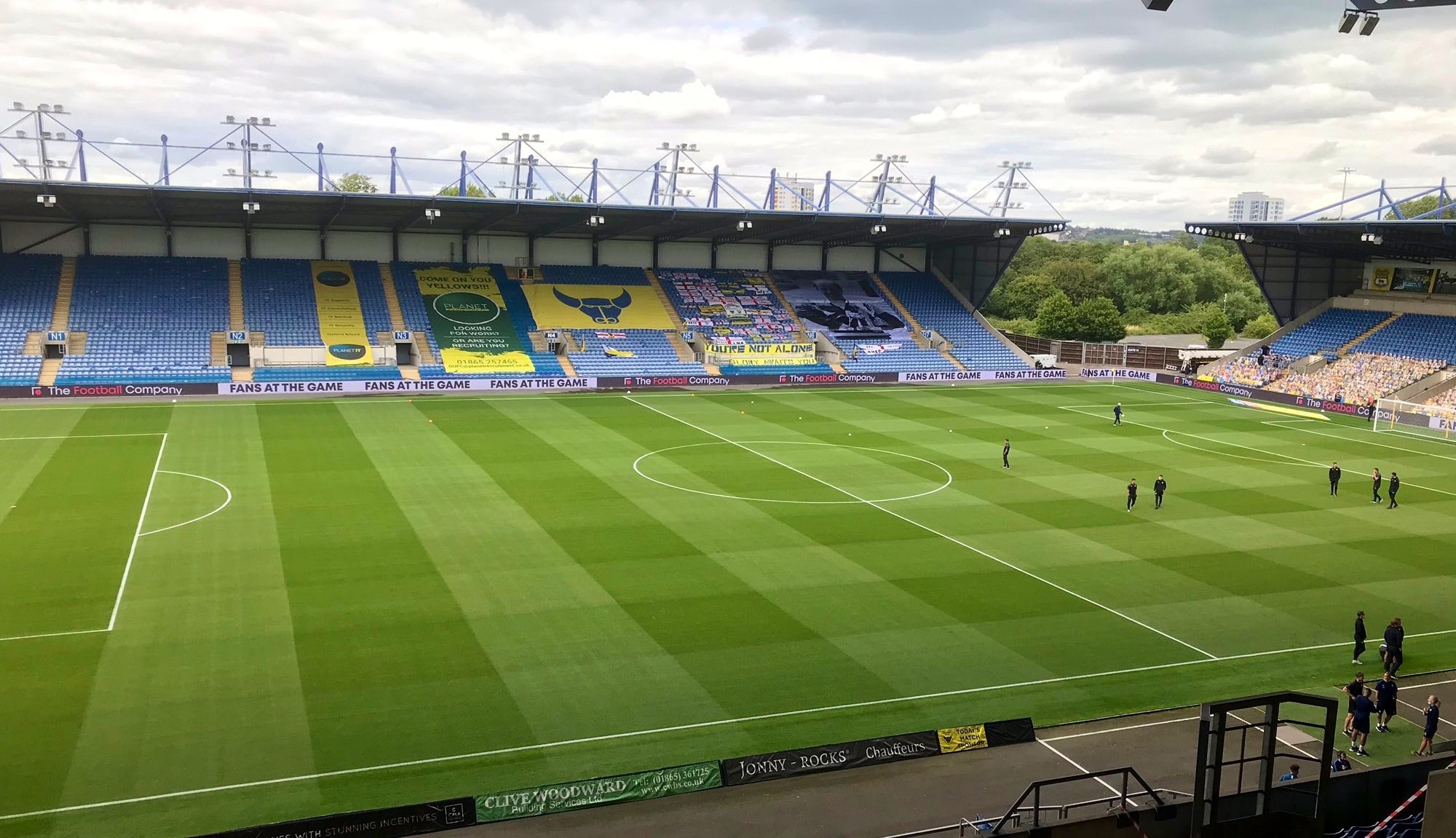 With the new league season just days away, host of Express FM’s Football Hour and Pompey Live pundit Jake Smith turns the spotlight on Oxford United as part of his club-by-club preview.

Intro: Oxford United, founded in 1893 as Headington United, are entering their fifth season in League One, having come up from League Two in 2016.

Since their promotion, The U’s have finished in 8th, 16th, 12th and 4th, reaching two consecutive EFL Trophy Finals within that timeframe too.

Throughout their entire history, Oxford United have spent an accumulative 8 years in the second-tier, along with reaching the top flight in 1985 for the first time.

The U’s will be bidding to reach the Championship for the first time since their relegation in 1999.

Oxford endured eight brutal seasons between the start of the 1998/99 campaign and the end of 2005/06, falling from the heights of the second-tier down into non-league.

In 2010, the club regained their Football League status following promotion from the Conference Premier, finishing in 4th-place and winning the Play-Offs to end their four-year stay in non-league.

Manager: Rainhill-born manager Karl Robinson is the man in charge of Oxford United.

The 39-year-old had an 8-year-long playing career as a midfielder/striker, featuring largely in non-league and in the Welsh leagues, running out for teams such as Caernarfon Town, Rhyl and Prescot Cables.

Robinson first came onto the coaching scene in the late noughties, following his retirement as a player in 2007 whilst at Warrington Town. In the three years before his first actual managerial position, he was employed as a coach at both the Liverpool youth academy and also Blackburn Rovers.

On the 10th of May, 2010, Karl Robinson was appointed as the first-team manager of Milton Keynes Dons, having previously been assistant to former boss Paul Ince. Robinson led MK Dons to fifth-position and a Play-Off finish, which was regarded as quite the achievement, having improved on the club’s previous League One finish.

The 2014/15 campaign provided arguably the best of Robinson’s managerial career to date, guiding MK to a surprise 4-0 win over Manchester United in the League Cup and, more importantly, to automatic promotion to the Championship via 2nd-place – Will Grigg made his entrance on to the Football League scene by ending the season as the club’s leading goalscorer (22) and youngster Dele Alli also made his breakthrough, thus earning a move to Tottenham Hotspur. Robinson was kept on by the club despite their relegation from the second-tier just a year later and was relieved of his duties in October 2016, after a 3-0 defeat to Southend United capped a run of four games without a win.

He returned to management just a month later, taking on the job at Charlton Athletic following the sacking of Russell Slade as Addicks boss, though was unable to take the club up to the Championship, leaving The Valley by mutual consent in March 2018.

On the same day as his departure from Charlton, Robinson was revealed as the new Oxford United boss, signing a two-and-a-half-year contract, which was extended to the summer of 2022 last summer. Robinson enforces an attractive brand of football at the Kassam Stadium, playing the ball along the floor at a decent pace and with an ethos to attack at every given opportunity, the polar opposite of the style of play implemented currently at Fratton Park.

Across the 123 competitive fixtures in which Robinson has taken charge of at the club to date, 50 have returned wins while 37 have ended in defeat – accruing a win percentage of 41%.

One To Watch: 23-year-old forward Dan Agyei has been tagged as a player to watch out for this season.

The London-born playmaker, who stands at 6’ 0” tall, can operate as both a striker and a winger, giving boss Karl Robinson plenty to think about during his team selections.

The new campaign could act as a platform for Agyei to make his biggest impact in a yellow shirt, having failed to appear in the Oxford starting lineup on a consistent basis since joining from Burnley last summer. Oxford had to pay the Premier League club a compensation fee in 2019 after Agyei turned down a new contract at Turf Moor, despite leaving as a free-agent. He is contracted to remain at his new club until 2022.

Prior to signing for Oxford United, Agyei spent two seasons at AFC Wimbledon as a youth player, featured three times for Burnley and enjoyed useful loan spells in the Football League at Coventry City, Walsall and Blackpool.

Agyei will continue to wear the No. 19 shirt this season.

Signing of the Summer (So Far): Manager Karl Robinson has added former Barcelona central-midfielder Marcus McGuane and Nike Academy graduate Sean Clare to his squad for the 2020/21 campaign.

However, it is the contract extension of fan-favourite midfielder Cameron Brannagan which appears to stand out as Oxford’s most impressive “signing” this summer. The Manchester-born creative player spent 13 years in Liverpool’s youth set-up before turning professional in 2014 – he made 3 senior appearances for the Reds during his four-year spell post-academy.

The 24-year-old has managed to find his footing in the EFL of late, initially experiencing first-team football below the Premier League midway through the 2016/17 campaign when he was sent on-loan to Fleetwood Town in League One on January 27th. He made 14 appearances in all competitions for the Fylde Coast-based outfit before returning to Anfield in the summer.

In January 2018, Brannagan moved to the Kassam Stadium on a three-and-a-half-year deal for an undisclosed fee and has since made 83 competitive appearances for The U’s. In his first full season at the club, the midfielder, who holds the squad No. 8, claimed the Players’ Player of the Season award.

Season Expectation: The aim, I believe, for Karl Robinson at Oxford United this season is to build on last season’s Play-Off campaign and maintain the threat they pose to their promotion rivals.

It may not be as simple for them this time around however, the quality of teams coming down from the division above replacing surprise packages Coventry City and Wycombe Wanderers will, on paper, add more competition for those high-quality squads of which have been challenging at the top for a number of seasons already.

Another Play-Off campaign would not be deemed a failure, however with the strength in depth the gaffer has at his disposal, and with a smaller weight of expectation held against his side, anything less will more than likely disappoint supporters.

Robinson’s Revolution – What to Expect from The U’s

I spoke to an avid Oxford United supporter, who goes by the alias ‘Ox Blogger’ on social media, about their side’s chances ahead of the new league campaign.

When asked what is expected to change, if anything, at the Kassam Stadium to improve on last term’s Play-Off heartbreak, the supporter responded: “Given that we just missed out on promotion, and we’ve kept a majority of last season’s squad, we’re not far away. We need to replace Rob Dickie, who has gone to Queens Park Rangers, but otherwise the squad is generally in good shape.”

Then questioned about the impact the salary cap has had on the U’s, the answer returned read: “It hasn’t affected us at all as far as I can see; we’ve signed Matty Taylor, who was on loan from Bristol City last campaign, and Cameron Brannagan signed a new contract despite being watched by Championship clubs.

“I don’t think we’ll see the true effect until next season.” – they continued.

“There’s a lot of positivity, but so much uncertainty”, the Ox Blogger revealed, discussing what can be expected of Oxford United in 2020/21 – “Given how close we got last year, I think Play-Offs should be an expectation. The competition looks a little hot to expect automatic promotion but a lot of the bigger clubs – Wigan, Charlton & Sunderland – have their own problems, so it’s not beyond the realms of possibility that we might make the top two.

“I would predict a fourth-place finish – a comfortable Play-Off position. Both Marcus McGuane and Sean Clare look like excellent signings but Cameron Brannagan’s contract extension could be the most important. If fit, he will run games and is among the best in the division in his position.”

Speaking of who they reckon will be a player to keep tabs on next season, Ox Blogger replied: “Striker Dan Agyei. We signed him from Burnley last year and was used fleetingly, but increasingly as the season went on, his impact grew. It could be a big season for him.”

Back in July, Karl Robinson’s side missed out on promotion to the Championship at the final hurdle, losing 2-1 at Wembley to Wycombe Wanderers. This supporter is looking for a quick bounce back and hopes that his players can keep their heads up going into the new season: “The squad know how close they can get to the Championship. Wembley was a blow but, in the circumstances, it didn’t have the deep impact that a normal Play-Off defeat might have had.”

They went on to add: “As a result, it’s about sticking to the same principles that got us there last season. That momentum could get us very close again this year.”

“Karl Robinson plays a fast, attacking possession-based game. When it works, it’s amongst the best football we’ve seen at Oxford in years. There used to be a lot of scepticism about Robinson and his approach but last season, he converted most to his way of playing.”

Switching focus to Pompey’s chances, the fan and blogger concluded our chat by saying: “It’s very difficult to rate Pompey, such a big club but with that comes so much pressure. My annual survey among Oxford fans predicted they’ll come in second to Wigan Athletic. Read into that what you will!”