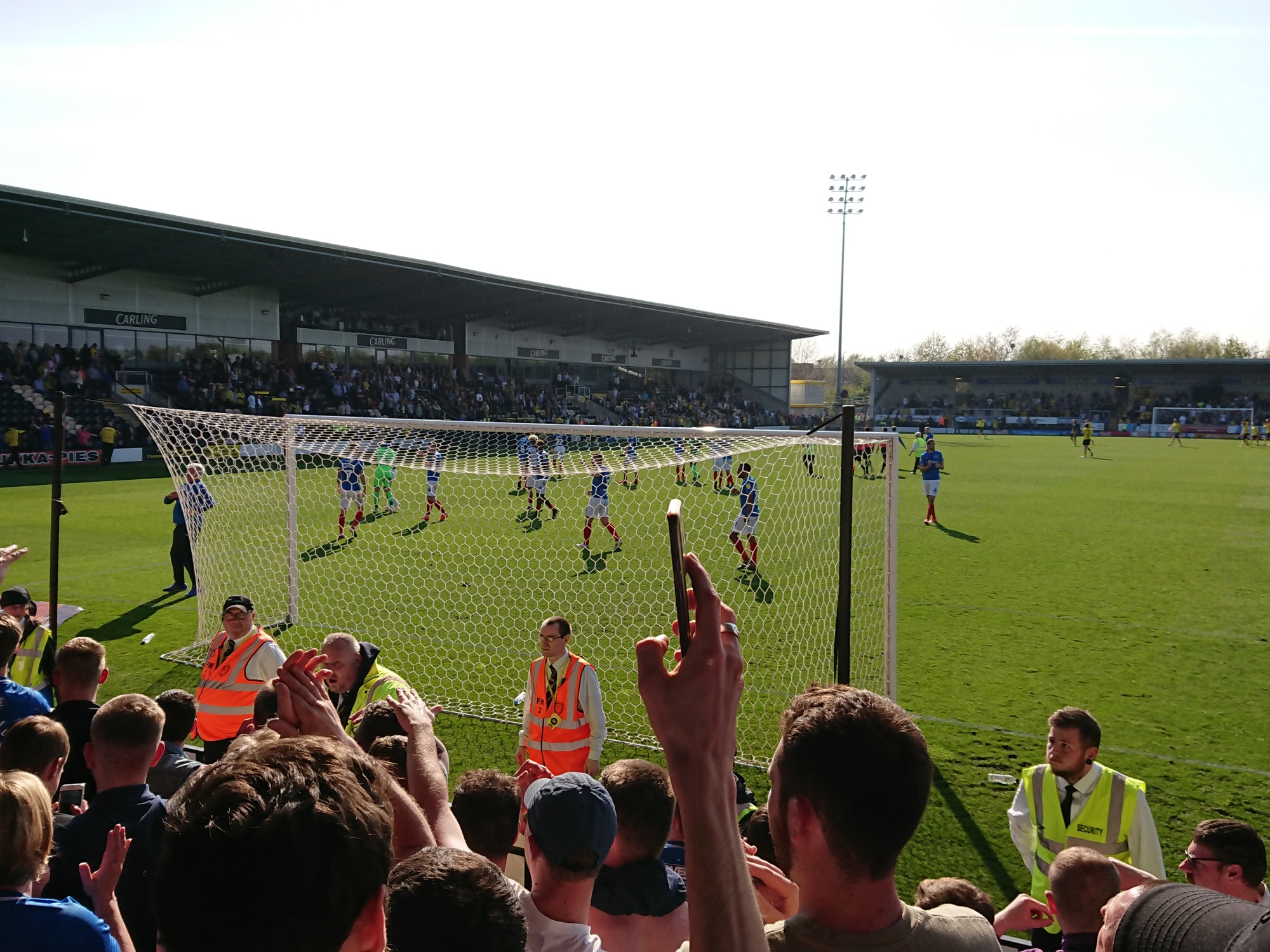 Keeping the club-by-club profiles coming ahead of the new season, it’s the turn of Burton Albion to come under the spotlight of Express FM Football Hour host and Pompey Live pundit Jake Smith.

Intro: The club are situated within Burton Upon Trent, a small market town on the far-Eastern side of Staffordshire. Albion’s nickname ‘The Brewers’, derives from the town’s proud brewing heritage dating back centuries.

Formed 70-years ago in 1950, Burton Albion competed in the non-league system of English Football all the way up until 2009, when they were promoted into League Two – the club has never looked back. In fact, the Brewers famously stormed to the dizzy heights of the Championship and in quite some style too.

In 2014/15, up-and-coming manager Gary Rowett started the campaign with the club but left midway through to take charge of Birmingham City, Jimmy Floyd Hasselbaink took over from his position and helped guide the club to the League Two title and promotion to the third-tier for the first time in the club’s history.

Similar events unfolded at the club the following season, Hasselbaink jumped ship to take charge of Queens Park Rangers in the December of 2015 with Albion going strong in League One, allowing Nigel Clough to return for his second spell in charge.

Burton were promoted to the Championship at the first attempt, completing a famous and unforeseen double promotion. They spent two seasons in the division before falling back down in 2018.

Manager: Burton defender Jake Buxton was appointed as player-manager of the club in May, following the resignation of Nigel Clough (son of the legendary Brian Clough), who stepped down from his role with the club’s financial status in mind.

The impact of the COVID-19 outbreak, with games cancelled and fans unlikely to return at full capacity anytime soon, many clubs have been reluctantly forced to make big decisions when it comes to their expenses and staff wages. Clough felt it only fair to allow Burton, where he is still acknowledged as a fans favourite, to cut costs and appoint somebody who is already under contract.

Buxton returned to the Pirelli Stadium at the tail end of the 2017/18 campaign, when relegation back down to the third-tier had already been confirmed, having previously ran out for the side in 2008/09.

The now-35-year-old has enjoyed a career that has so far gone on for 18 years, pulling on the shirts of clubs such as Mansfield Town, Wigan Athletic and more notably Derby County, with whom he racked up 139 appearances in a 7-year timeframe.

Due to the fact that Buxton is so new to the world of management, it is unknown as to what style of play he is likely to implement and how well he will be able to influence his squad – only time will tell such things.

One To Watch: 21-year-old midfielder Joe Powell has a lot of expectation weighted on his shoulders for the upcoming campaign. The Canning Town-born English youngster has been tipped to fill the void left by Scott Fraser, who was released following the expiry of his contract at the end of July.

The Scotsman finds himself without a club but ready for a new challenge, having spent 2-years in Staffordshire where his efforts were received gratefully by supporters.

Powell penned a two-and-a-half-year contract at the Pirelli Stadium on January 14th of this year, having been allowed to leave West Ham United, where he came through as a youth player. He joined the Hammers at the age of 8 and signed his first professional contract in January 2015, when he was just 16.

On September 26th, 2018, Powell made his debut for the club in an 8-0 Carabao Cup thrashing of Macclesfield Town at the London Stadium, a game which saw Conor Coventry and Grady Diangana also make their debuts.

The latter half of the 2018/19 campaign was spent on loan at Northampton Town, where he made 10 appearances and scored 2 goals. He was, however, unable to secure first-team football in the opening 5 months of 2019/20.

He has since featured in 10 matches for the Albion, netting on 3 occasions.

Joe Powell will be donning the number 23 shirt for the Brewers.

Signing of the Summer (So Far): Former Stevenage and Peterborough United general Michael Bostwick is arguably one of the better signings made by Burton since the opening of the transfer window.

The 32-year-old arrives at the Pirelli with a heap of experience behind him, having made over 400 appearances in the professional game.

Bostwick made his breakthrough in London with Millwall, where he featured often for the Under-18s and the reserve side, but failed to make enough of an impact to appear for the first-team, instead he was sent to Crawley Town on work experience between January 2006 and May 2007. The moves counted as work experience and not a loan due to his young age.

Before he signed a one-year deal at Burton on August the 5th, Bostwick spent three seasons at Lincoln City, joining the Imps in the summer of 2017 following the club’s promotion into the Football League.

The midfielder/makeshift defender contributed his fair share to the club’s League Two (2019) and EFL Trophy (2018) winning campaigns and left Sincil Bank with over 100 appearances under his belt.

Season Expectation: Having come down from the Championship following two consecutive seasons in the second-tier in 2018, Burton Albion fans should be expecting a little more than mid-table obscurity again. Having said that, the lack of experience on new manager Jake Buxton’s CV, coinciding with the salary cap implementation AND the sheer volume of richer clubs in the division this season, it would be harsh to call another mid-table finish a failure.

Supporters and owners alike are more than likely expecting to threaten the teams in-and-around the play-off places, without piling the pressure too much on the manager to achieve such a feat.

It appears that gradual progression and signs of playing improvements are all that is expected of the 35-year-old, who takes charge of his maiden game in management at home to Accrington Stanley in the Carabao Cup on September the 5th.

Can Buxton push the Brewers to Play-Offs?

Edward Walker, who is a co-host on the D3D4 Football Podcast, talks us through all we need to know about the Brewers ahead of the new season.

The long-time Burton Albion supporter is expecting big improvements on the pitch in 2020/21, the club’s third season in League One following relegation from the Championship in 2018: “I would have expected the club in that time to now be pushing for a play-off place, but the pandemic has had implications on the club and so it may have set things back a couple of years from where they previously were.” – he stressed.

However, Edward also acknowledges that there may be some obstacles in the way of Albion and reaching the heights of years gone by. He told me, “There’s a new management team in charge, which does bring with uncertainty as to how the team will play and perform.

“The hope for me is that Burton can improve on the 12th-place finish from last season, and at the very least match it.” – Edward explained.

In January, leading goalscorer Liam Boyce departed the Pirelli Stadium for Scottish Premiership outfit Hearts, scoring the winning goal against Rangers on his debut. Edward strongly believes that was the turning point in the Brewers’ season: “It was a move that was always going to happen at some point but it came at a time when Burton looked like being on for a genuine top-six push.

“With Boyce gone and no natural ‘Number 9’ up top, the firepower wasn’t there to the same level and Burton’s defensive frailties started to show. To improve this year, that new first-choice striker needs to emerge, and the defensive shape needs to be sorted out, particularly when dealing with very direct opponents.”

Despite the loss of such a key player, the life-long supporter is confident that new boss Jake Buxton can call upon his own previous challenges to sort things out at the back: “As a former, very experienced defender, I like to think he knows how to do that.”

Buxton was appointed as player-manager on May 18th, therefore is yet to take charge of his first competitive fixture as a gaffer – Edward is one of many fans who are sceptical about how his lack of experience could hinder Burton’s chances of progressing in the short-term: “It’s probably the big doubt for Burton Albion this season.”, he stated.

Continuing: “The signings have looked good, but no one is quite show how Buxton will make them play. It’s his first venture into senior management and, whilst you would like to think that he has taken plenty of inspiration from Nigel Clough, that is no guarantee.

“He could, in truth, be a revelation at the club, or he could be a complete failure.” – Edward further describes how much of a gamble the appointment has been. “Only time will be able to tell with that one and unfortunately, we’ll have to watch it from afar during the early stages of the season.

“The fans will no doubt get behind him as the new campaign begins and I’m optimistic that he can make this club compete against the others in what looks to be a very tight division.”

I then proceeded to ask how Edward feels about the implementation of the salary cap, as well as how he believes it has affected Burton Albion’s transfer business and chances of promotion in the future. He told me: “Albion have always been a club that knows how to work within small budget. I don’t know the exact figures in terms of squad wages, but the cap is likely to really affect the club if it remains for the long-term.

“Several of Burton’s signings came before the was introduced. It’s not been confirmed, but this may well have been done so that the players’ wages contribute to the average and do not have as much impact now that the cap has been put into use.” – Edward speculated.

When asked to predict where the club will finish come May 2021, Edward replied: “I’ve been trying to draft a predicted League One table together and it’s really difficult! I feel like the current climate will set the better run clubs to flourish and that makes a number of last season’s mid-table sides ones that you should keep an eye on this year.

“In terms of Burton Albion, I’d hope for a play-off push, but would not be too surprised if they fell short towards the end. I’ll go with 10th for now.” – he concluded.