Much has been made recently of what method of points per game ought to be used in the event that the 2019/20 seasons are curtailed in the English professional leagues.

Much has been made about the importance of home and away fixtures left leading to the suggestion of a weighted points per game table.

This is a very important point to consider. OPTA will tell you there is a marked difference in points teams earn at home to what they earn away. They are not wrong.

A recent article in the Athletic pointed to the average PPG at home being 1.55 points, compared to 1.19 away from home in the EFL. Further to this, in every league, there is a discrepancy between the number of home and away games played by each team.

We are, generally speaking, in a situation where the majority of each league has played an odd number of games – 29 in the Premier League, 37 in the Championship, 35 in League One, and 37 in League 2 to be specific.

So why is direct PPG still likely to win out as the solution presented at the board meetings? The context of the problem they are trying to fix. Specifically the tables as they stand at the very top tier of the game: The Premier League.

The EFL votes on Leagues 1 and 2 have been deferred because they want consistency with the Premier League.

With the Premier League leading plans for project restart, and Monday’s FA intervention, it is for them to decide the fairest method. And it’s in the Premier League where the fallacy of fairness that brings about WPPG falls apart.

The proposed tables
Consider the two proposed league tables on direct and weighted points per game: 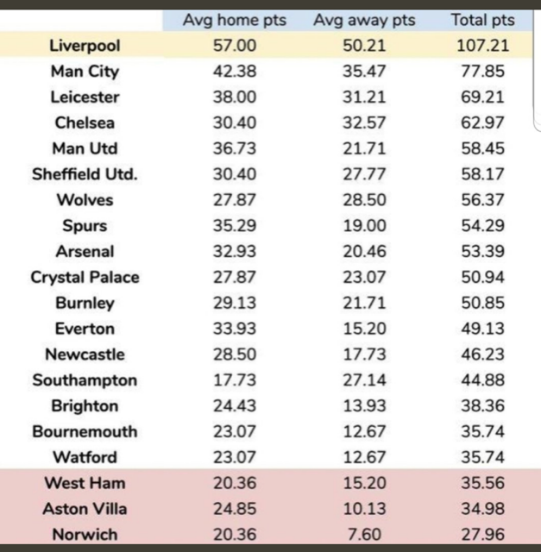 For purposes of the point I am going to make, I do acknowledge the differences between Arsenal/Spurs and Burnley/Crystal Palace in terms of who finishes higher.

But in the scheme of things, these are immaterial, beyond some additional prize money. What’s most significant is the choice that in effect presents itself.

Do you relegate Bournemouth, or do you relegate West Ham. Emotional arguments could take over here if we are not careful. The feeling of Bournemouth perhaps not befitting the Premier League surroundings.

Or West Ham’s acquisition of a stadium paid for by the tax payer, and Sheffield United’s opportunity for vengeance after 13 years.

It is therefore neither fair nor reasonable to ask the clubs to vote on which equation is fairest. A decision has to be made to take one of them off the table and put it against voting to resume the season, which as we know is an ever diminishing possibility.

The distortion of WPPG
You will note the difference in layout I’ve done just to illustrate the WPPG table in terms of how it is calculated. Home points average x 19 and away points average x 19 then added together. The system is clearly designed to factor out that weighting issue.

The problem with it for this season is this: West Ham and Bournemouth have played exactly the same number of home and away games – 14 at home and 15 away.

For that matter, all of the bottom 6 have played one less home game than away, save for Aston Villa who have one additional home match against Sheffield United also scheduled. Yet we have two different teams who could down in 18th based on 2 different formulas.

What also throws the idea about the differential of home and away into further farce, is that of the bottom 6, West Ham have the best away record. It is their home form that is of biggest concern.

There’s only one conclusion from this. Home and away weighted PPG actually distorts the table rather than it reflecting the true picture. The reason? The quirk of the fixture list.

West Ham are roughly 4 points behind Brighton and Aston Villa in terms of home PPG. But consider this:

The point is this; the home and away weighting counts for nothing in the Premier League because the same number of games have been played by those who are affected materially by one equation over the other.

What home and away PPG would do is magnify the fixtures played to date disproportionately. Something direct PPG does not do to the same extent.

So West Ham being relegated over Bournemouth would purely be down to a different formula which gives an inaccurate picture of what has been played so far, at least for the problem we are trying to solve.

Let’s still get it right, direct PPG is not a solution to be celebrated, and many would sooner the season was voided from a sporting perspective if it can’t be concluded.

But the rules that are in place in each league, plus the threat from broadcasters would appear to rule this out. But what direct PPG does have over weighted PPG is that it is not a projection in any way. It purely gives each team sporting merit equating the points they have earnt so far over the games that have been played. It is the least bad.

For those that advocate that the season would be better ended by means of projection of what would likely happen, you would have to use a variety of different measures; the relative strength of opponents, what the data says they have done over the season, how that would quantify in a match up with one team at home and the other away.

It is neither transparent for clubs and therefore not desirable. For any club that believes in the randomness of football for that to be considered, weighted PPG is the first step against that.

Considering the data that feeds into the outcomes, the Premier League are therefore far more likely to offer a direct points per game scenario as their recommended solution if they have to curtail the season.

This would be catastrophically harsh on AFC Bournemouth given they are in essence a goal from safety with 9 games still to play, but given these 2 scenarios, it is the lesser of two extreme injustices.

The knock-on effect
The EFL chairman Rick Parry is monitoring the Premier League’s every move closely. For the EFL, the primary objective is to uphold their end of the Tripartite agreement, which was the basis for the FA intervention on Monday saying that 3 teams must be relegated from the Premier League.

The EFL therefore will almost certainly adapt whatever model the Premier League set as their own contingency plan. That option will be put to EFL clubs when they begin discussing the way of ending their lower divisions on Friday.

Parry is also looking to uphold as much of the existing EFL regulations as possible, including the same number of promotion places through the leagues with the same methods.

This means play-offs in Leagues One and Two being held if the Premier League and Championship can resume as hoped. This will be put to the test with the bottom two tiers expected to vote to end the season next week, despite there being some strong resistance from some higher placed League One clubs.

If football cannot resume in any capacity before the 2020-2021 season, the debate will shift onto whether to promote Fulham, Wycombe Wanderers and Cheltenham Town – the would-be highest ranked play-off sides – or to limit promotion through the leagues to the EFL’s automatic places and reprieve AFC Bournemouth, Charlton Athletic and Tranmere Rovers.

That is a debate for another time. It is understood that in that scenario, the EFL would very much push for the former, with the weight of the FA’s intervention to the Premier League likely to cascade through the divisions.

Whatever happens though, it is now highly likely that the EFL will not be relegating Stevenage out of the league, and they will only accept one team to be promoted – which is likely to be Barrow AFC – with agreements between the EFL and National League being different in nature to those between the Premier League and EFL.

* = Subject to Manchester City’s European ban being upheld for 2020/21
** = Subject to who wins the 2019/20 FA Cup. If it is cancelled, or a club who have already qualified for Europe win it, Arsenal will take this last spot.
*** = Promoted if the playoffs are cancelled in that division.
^ = Likely to escape relegation to the National League.