Marcus Harness arrived at Fratton Park without an all-encompassing transfer saga. Pompey fans only heard about the new signing when Harness was pictured at the training ground and within the afternoon, he was signed to a three-year-contract.

Once again, Kenny Jackett is investing heavily into younger attacking players who are moving into their prime.

Inevitably, the arrival of Harness increases the debate over Jamal Lowe’s future. With Wigan continuing to pursue their interest and Portsmouth holding firm to their £3m valuation, Lowe is still stuck in a transfer limbo.

Some fans were underwhelmed by Harness’ arrival: his goal return (6 goals in 39 games) last season is much less than Lowe’s (17 goals in 55 games) and he’s signing from an unfashionable club like Burton. Many assumed that Harness was not an adequate replacement.

To discern whether Marcus Harness can replace Jamal Lowe, I compared both players stats and patterns of play. By using Wyscout and video analysis, we’ll see if Harness is an apt comparable to Lowe and how the new signing should be utilised by Portsmouth.

Difference in role but similar in ability

Both players fulfilled different roles last season for their respective clubs. Lowe was utilised as an inside-forward for Portsmouth, a goal-scoring threat from the wing who’s used to both create chances and take them.

In this role, Lowe profited from Pompey’s dynamic front four, which overloaded wide areas and used crosses, long passes and pace to stretch the opposition defence to create chances. Often, one of the attackers hung onto the last defender and had enough space to create key chances.

In contrast, Harness was used as a more traditional playmaker. His job was to build up Burton’s offence and thread key passes to his teammates, whether it was out-wide or through the middle.

The difference in role explains why Harness has not scored as many as Lowe, getting less than half of Lowe’s match-time (2662 minutes compared to 4958 minutes); resulting in less shots and clear-cut chances overall.

Harness only had 14/42 shots on target in the 2018/2019 season, compared to Lowe’s 42/107. These numbers are unsurprising considering the roles I described earlier.

Despite these differences, both players have similar average attacking stats across 90 minutes (fig 1).

Harness and Lowe are a handful for opposition defenders, being successful at dribbling and retaining position in the final third. Given more starting minutes, Harness can potentially play as an inside forward with these attacking stats. His ability to drive play and cut inside from the wing may lead to him being as clinical as Lowe overtime.

Both Players – Dribbling – Cutting Inside

Or, Kenny Jackett might utilise his creativity and play him as a centre-attacking midfielder. 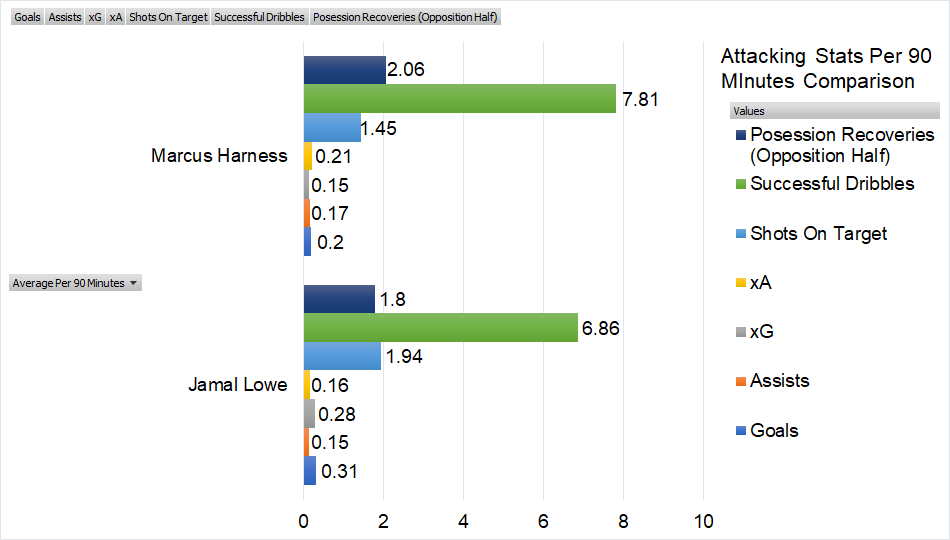 Figure 1 The attacking stats between Jamal Lowe and Marcus Harness. Even with Lowe’s higher goal-scoring record, both players are similar in terms of dribbling and attacking play.

One of the most striking things about Harness is his ability to drive play; he was not exclusively used on the right wing for Burton.

In certain matches, Harness played through the middle and contributed to build up play, as well as giving Burton an outlet on the counter attack. Jamal Lowe almost exclusively stayed on the right wing as an outlet for the midfield (fig 2).

Figure 2 The heatmap for both Jamal Lowe and Marcus Harness for the 2018/2019 season.

These positional and role differences can also be shown by looking at both players passing accuracies from last season (fig 3). 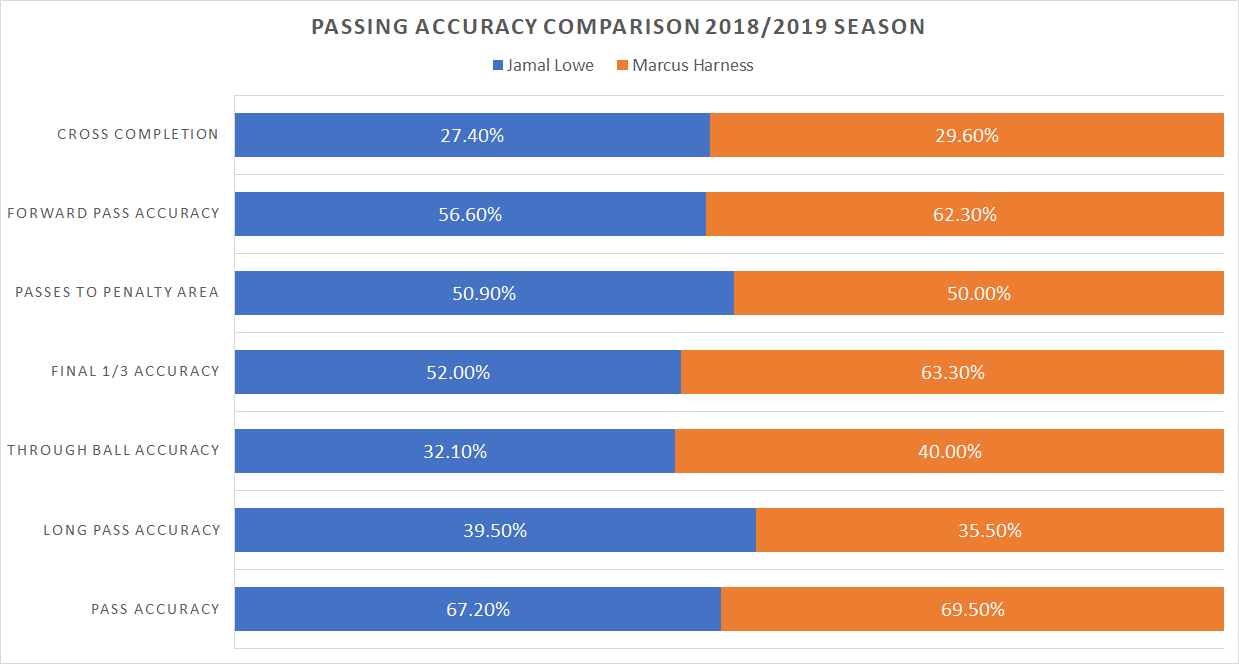 Figure 3 The passing stats for Jamal Lowe and Marcus Harness for last season. Harness is slightly more accurate in most areas but Lowe has played more than double the minutes on the pitch. The main difference is Harness being more accurate in build-up passes (passes to the final third and through balls).

Passing accuracy can often be a red herring, as the completion of the pass relies on a teammate receiving the ball, but the stats can give an insight into the preferred passes of certain players.

With Harness being utilised deeper in the midfield, he’s used to making more accurate passes to the final third.

But in a similar fashion to Lowe, Harness often collects the ball out wide and looks to split the defence with crosses or through balls.

With a variety of passes in his locker, Harness has the potential to play any position across the midfield in Kenny Jackett’s preferred 4-2-3-1 formation.

To be successful, Harness will be asked to switch the play with a direct pass to stretch the opposition back-four.

Jamal Lowe does this with great effect, being highly accurate with longer passes (fig 3).

Lowe often has to make these passes due to Portsmouth’s style of play, focusing on direct passing to either initiate a counter-attack or exploit gaps in the opposition defence.

The analysis from Ram Srinivas backs up how these players are used creatively and the types of passes they play.

Both players are well above the average League 1 player for passing and creativity. With Jamal Lowe making longer passes, his accuracy would inevitably be lower (fig 3).

Overall, Harness and Lowe both create a high volume of chances and either of them in Portsmouth’s midfield would be a handful for opposing defenders.

All of the stats and clips indicate that Marcus Harness is a definitive comparable to Jamal Lowe and can replace him at RW if necessary. Even though the former Burton winger was scored fewer goals and has inferior xG stats last season (fig 1), he has the creative and technical abilities to play as part of Kenny Jackett’s front four and improve his goalscoring numbers.

Although, the best scenario would be for Harness to play as a no. 10.

If we assume that Jamal Lowe stays at Portsmouth, Jackett could potentially play a front four of Jamal Lowe, Marcus Harness, Ronan Curtis and Ellis Harrison; this front four would be mobile, clinical and adaptable depending on how Jackett wants to play.

And, with Brett Pitman, Oli Hawkins, Ryan Williams, Gareth Evans, Louis Dennis and Andy Cannon to pick from, Pompey could have one of the deepest and versatile attacking line-ups in League 1.

Kenny Jackett as already hinted that Harness could play alongside Lowe at CAM and does not see him as a replacement.

Ideally, Jamal Lowe would stay at Fratton Park but Pompey have the secured a potent alternative in Harness.

The transfer is not a gamble by any means. Portsmouth could be potentially investing up to £1 million in Marcus Harness – the biggest fee for a player in over half a decade – but the fee is worth it.

Part of the Matt Clarke transfer has been reinvested wisely and I’m really excited to see Marcus Harness to lace up his boots for Pompey this season.