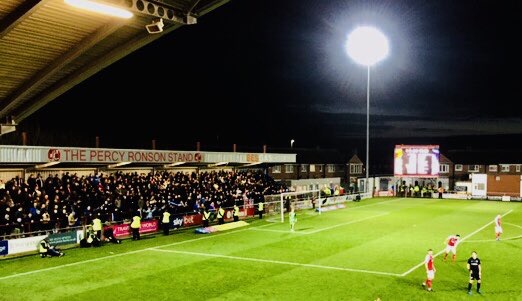 An inspired 2nd half display from the Blues saw them brush past Joey Barton’s Fleetwood to move three points clear of Luton Town in second place.

Here are five things we learnt from the eventful game on the Fylde coast.

1. Firstly, the Blues showed the strength in depth of their squad. This was the first time for a number of weeks Kenny Jackett has made significant changes to his starting line-up.

The one enforced change, Anton Walkes for Nathan Thompson had many fans worrying. Walkes display, especially in the 2nd half was exceptional and wonderfully capped by his strike to tilt the game in Pompey’s favour.

On the other side of the back four Brandon Haunstrup deputised well for the injured Lee Brown. The depth of Jackett’s squad could be essential as move through the next few months.

2. Pompey can score goals without Oli Hawkins. There has been much debate in recent weeks over Pompey’s frontman, and his critical role in Jackett’s system.

Today we saw Brett Pitman given the chance. Pitman worked tirelessly, competed aerially against the two centre halves, linked play well and held the ball up whenever he could.

3. The Blues bounce back well from defeats. Pompey went into this game on the back of the boxing day defeat to Gillingham. This was exactly the kind of response Kenny and the fans wanted.

Although defeats have been hard to come by for Pompey this season, every time they have bounced back with a positive result and this was shown with the emphatic 2nd half display.

Josh Parker’s header for the Gills was one of their first attempts on the Craig McGillivray’s goal, and today was a similar occurrence when Paddy Madden fired into the bottom corner after a rare foray into the Pompey box.

An explanation for these goals is hard to come by. However, let’s hope these are one-off occasions and not a trend leaking into the Blues make-up.

5.  Jackett shaking things up. We saw Jackett change his starting 11 significantly today, we have not been used to seeing substantial changes in recent weeks. The inclusion of Ben Close from the start was a pleasant surprise, as the Blues looked to dominate the middle of the pitch.

The addition of Close to the starting line-up could show the trust Kenny has in this squad of players and is not afraid to change system to get results, which was shown at Barnsley two weeks ago when a 3-5-2 was adopted.