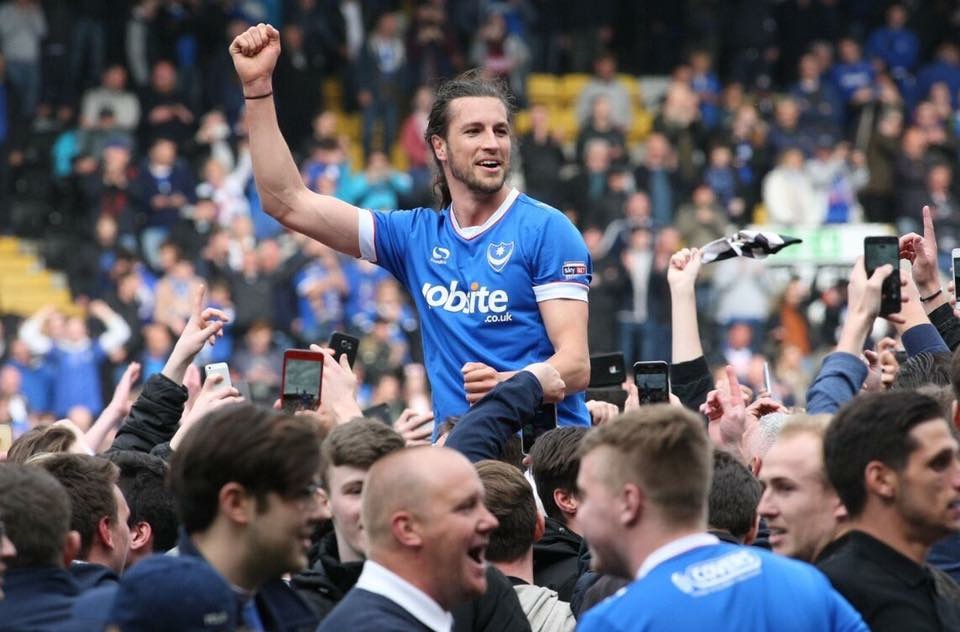 A successful season for Pompey and Christian Burgess who won the PompeyNewsNow fans’ vote for player of the 16/17 season.

Christian took time from celebrations to respond to questions sent in from fans on Twitter #AskBurgess.

Q. How do you get your hair like that? What conditioner do you use? (Alex Read/Mason Lemon)

A. Yes, I’ll get a trim now the season is over but probably have the same style just shorter!

Q. Do you hope to be Pompey captain after Michael Doyle? (Ben Rudkin)

A. To be the captain of a club like Pompey would be a massive honour, but at the moment I’m just focussing on my football and getting in the team next year.

Q. Who threw the first punch – you or Doyle?! (Gareth Hawkes)

Q. Do you think we can challenge for promotion in League One? (Callum Davis)

A. I’m always positive but I think we’ve got a great squad and set up to mount a serious challenge. First and foremost we want to cement ourselves in that League, but I think if we show the same ability and character as we did this year then we’ve got a chance.

Q. What is your favourite moment this season other than promotion? (Ben O’Sullivan)

A. Have to be scoring the winner at Orient, round the corner from where I grew up and in front of my friends and family on my birthday weekend.

Q. What’s been the difference between this season and last? (Andy Horton)

A. Not a lot, I think we’ve managed to stick together a little bit more this season at key times and also managed to put a run together at the end of the season. Also, perhaps injuries. Otherwise very similar!

Q. Would you rather fight 12 duck sized horses or 1 horse sized duck? (Dazzla)

A. 12 duck sized horses. Could just kick them. A horse sized duck would be pretty big and scary!

A. Securing promotion and getting lifted up on the fans shoulders celebrating amongst the pitch invasion!

Q. Has your hair ever affected your performance on the pitch? (Ben Brooks)

A. Only once in my first pre-season game for Pompey at Havant. My hairband broke just as I was walking out from the changing rooms and I didn’t have a spare. Had to get my large headband, and my hair was all over the place, sometimes I couldn’t see what was going on which is why I always play with it tied up 😂

Q. Can you help get Gareth Evans on Twitter? (Aaron)

A. Toughest is probably Akinfenwa, he was a real handful in the FA Cup but didn’t pose too much trouble at their place. When Wycombe have a lot of the ball, it’s hard to stop him or move him. You just have to get goalside but is really dangerous in the box. Best striker was probably John Sheehan for Newport on loan from Swansea.

Q. You often tweet about cricket – are you any good? Batsman or bowler? (Simon Wratten)

A. I’m very good! A batsmen who usually opens but can bat anywhere in the line up. Go hard at the ball!

Q. How many beers did you have after Notts County? (Alex Read)

A. Too many to count!

Q. Who is your defensive football idol? (Pragmatic Frog)

A. I loved Rio as he was sound defensively and also could play on the floor. Now look up to the likes of Cahill who’s having a great season!

A. Been a few good ones so it’s a hard choice. Orient away, cambridge away are up there, but probably pick Barnet at home. Was at my best defensively that day and had a few one v ones where I came out on top which are always pleasing. Worst, probably Doncaster at home. Couple of key decisions I made just didn’t go for me and was a disappointing result and performance.

Q. Do you see yourself as part of this club in the future regardless of how the takeover goes? (Luke Hurren)

A. I’d love to be apart of this club in the future and hopefully can enjoy many more successes with Pompey and get back to where the club was. Would be a dream to be here for years to come!

Q. What is it like to live the life of a Pompey player? (Khlo Louise Scourfield)

A. It’s great, with the huge fan base it makes it so enjoyable on match days and the city breathes football which is great to be apart of. I love seeing Pompey kit all round the city and representing everyone on the pitch is an honour!

Q.  Your best goal of the season? (Miguel Connor)

A. Best goal was probably Orient as I had to get a bit of purchase on the header where as the others the crosses had enough pace just to meet them and they’ve flown in. Best assist was my ball to Chaplin at Cambridge away, I really enjoyed that!

A. Best player in my eyes, Enda Stevens, he’s had such a consistent season and is such a threat going down that left side. Energy and work rate is out of this world.

A. Header for Peterborough in the FA Cup against Carlisle. Was my second of the game around the 90th minute to win it 2-1. Was a serious header. Header at Dagenham last season is a close second!

Q. Why do you wear PSG shinpads? My 9 year-old son would like to know. (Stuart Rimmer)

A. Sure – 2 answers. Because Zlatan kept getting mistaken for me so sent me over a pair. And because they were the only ones in the Nike store in my size. 😂

Thanks for all the questions and a big thanks to Christian Burgess for his time. Play up Pompey!