Gosport sides have enjoyed success in the Portsmouth & District League down the years – not least Crofton Rangers and Apollo Sports.

Crofton Rangers didn’t hang around for long – only three seasons – but won the Senior and Premier Division titles. Dave Lillywhite was manager and secretary.

I can remember centre-back Dave Bowen, a rock at the heart of the defence, Tony Mitchell up front, Chris Bennett and Robbie Downing.

There was also Martin Brightman, who was to later play for Apollo Sports and Locks Heath. He was a superbly talented footballer who I was surprised did not go on to a higher grade. I used to enjoy watching him play. 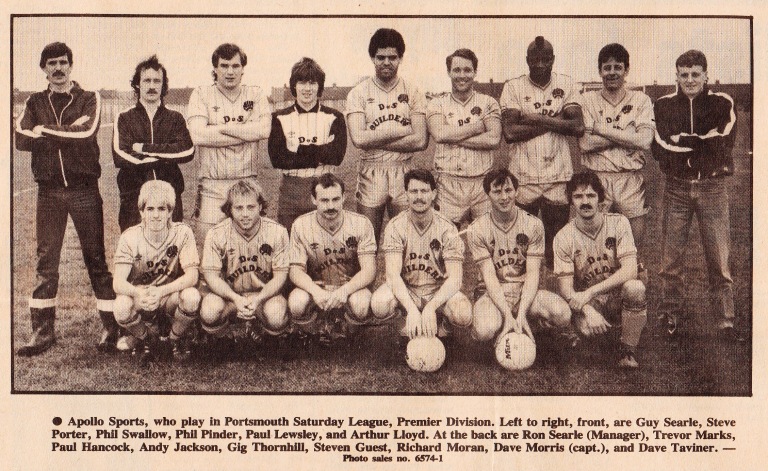 Apollo Sports, managed by Ron Searle, were a fine side. Their line-up included Dave Taviner, who went on to play many seasons for Gosport, with Trevor Marks and Nigel Kent in defence, Steve Chambers and Staf Trenchard up front.

Two of my favourite players were Arthur Lloyd and Phil Pinder – what an influence they were to the team with their work rate and vision.

I remember seeing Pinder when he was playing for Brockhurst in a Hampshire Junior A Cup match. It was a typical winter day and the pitch was rock hard, players were struggling to keep their balance but Pinder stood out for me as he seemed to skate over the surface that day.

Other notable names were Gig Thornhill – a strong powerful centre forward, who had previously played for Fleetlands. Also leading the attack was Richie Moran – an all-action player who went on to play for Fareham and Gosport before a dream move to Japan playing for Fujita Kogyo.

On his return, he played for Birmingham City before finishing his career at Waterlooville scoring the winning goal in the Hampshire Senior Cup final against Havant Town at Fratton Park.

He later became active in promoting better recognition for black players – writing a book and appearing on television – as I believe he suffered terrible abuse at times. I always found Richie a courteous and likeable lad.

The start of the 1982/83 season saw the demise of Archital and North End United. Archital were league members for fourteen seasons. In their first season they won Junior IV. The next time they were divisional champions was 1972/73 when they won Junior II. Their success led to the formation of two further teams.

By the time 1977 arrived they were in the Premier Division after finishing runners up to Havant Town in the Senior. North End United, who had joined from the North End League, were previously known as Fosters Club and before that Juventus.

They won Junior I at the first attempt and the following season they won the Senior Division. This was followed by the Premier Division title in the 1978/79 season, as I mentioned in one of my first columns.

They had many star players in their ranks, some of who flitted between Hampshire League clubs. Andy Stewart was a key goalscorer during this time, possibly their best.  He starred briefly for Pompey as a youngster.