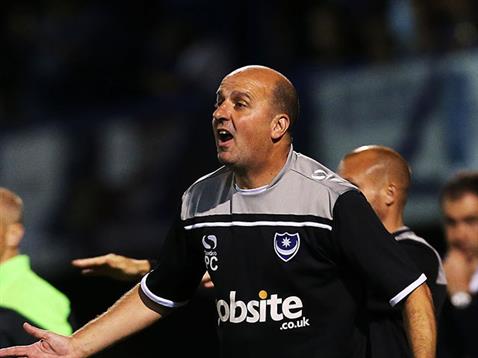 Eleven games in and who would have thought before the season started that Pompey’s away record would be superior to that at Fratton?

The Blues’ were frustrated by lowly Yeovil Town on Saturday despite having the vast majority of  possession.  The positive of a clean sheet was offset by the fact that they managed just two shots on target.

Going into the game, Pompey had been looking to bounce back from their first defeat of the season in midweek when Exeter had scurried back West with all three points.

Yeovil Town had been seen as the perfect opponents to set the home win column back on track, but it was not to be as they held out for a goalless draw.

“When you come to a place like Portsmouth, you’re always going to be the underdog, but I think that helped us, because we didn’t have the pressure, we were able to keep them out.

I know a lot of people say that teams park the bus at Fratton Park, but it’s not that, it’s the way you play against one of the best teams in the league. It’s tactics and it shouldn’t be discriminated.

In all honesty, I would’ve snatched a point away to the league favourites before the game in a second.”

“It’s disappointing for our players – and the supporters as well – to see sides come here and park the bus. That’s the way it’s going now and our job is to come up with a formula to try to get past that.

I’m not going to criticise Yeovil – my job isn’t to make excuses, it’s to find solutions. That’s what I’m paid to do. Fans pay their money to come and watch an exciting game and they’re not seeing too many of them at home.”

Despite some fans airing their frustrations at the final whistle, it’s important to put things into perspective. Just one defeat in eleven league matches has placed Pompey in fourth position on 20 points going into two away matches at Cambridge Utd and Newport County. Games that should on current away form bring at least four points, which will ensure the Blues’ keep in touch with Plymouth, Wycombe and Leyton Orient at the top.

Pompey return to Fratton Park for another midweek game under the new floodlights on October 20th against Stevenage. This time, fans will be hoping that if a bus is parked by the away side, Cook and his team will be ready with the solutions.