Contrary to last season, Portsmouth FC have had a disappointing start to the season. Supporters have watched Kenny Jackett’s solid defensive line-up crack on multiple occasions; coughing up goals, throwing away the initiative in games and all being supplemented with lacklustre substitutions.

I expected a blip to start the season because of Pompey losing key players such as Matt Clarke and Jamal Lowe, but this start appears to be more than a blip.

Portsmouth have only scored 5 points from 5 games, sitting in 17th place and 9 points behind current leaders Ipswich Town.

Some of these results are simply down to bad luck (Shrewsbury away), but other fixtures (Sunderland away, Coventry at home) saw Pompey drop points from winning positions.

This inconsistency has led to the confidence in the manager Kenny Jackett from fans to be at an all-time low. For many supporters, Portsmouth are already too far away to achieve automatic promotion.

By using Wyscout for football analytics and extended highlights from the EFL website, I’ll be evaluating why Portsmouth have had a bad start to the season and what improvements need to be made going forward.

Portsmouth’s defence has been inconsistent to say the least. The team defend in a similar fashion to last season; using the midfield to press any counterattacks whilst the back-four stands off to retain a defensive shape.

With last seasons centre-back partnership of Matt Clarke alongside Jack Whatmough/Christian Burgess, that mentality worked well, but the cracks are already showing this season.

So far, Kenny Jackett does not have a preferred centre-back partnership and due to injuries, less defensively responsible full-backs. In response, he is allowing his team at times to press the opposition more.

A stat which can measure Pompey’s level of pressing is PPDA. PPDA means passes allowed per defensive action, essentially how much time does the team give the opposition before closing them down. The lower the PPDA, the more a team closes down the opposition.

Portsmouth’s PPDA is 7.02 from their first five league games, the 4th lowest in the league. Although a team shouldn’t stand off their opposition too much, this high press can make Pompey susceptible to counter-attacks.

Coventry’s first goal was caused by Portsmouth pressing too much, as well as Lee Brown playing two Coventry players onside.

To show how effective this high pressing strategy is, we need to evaluate how good Portsmouth are at defensive duels. Defensive duels are 1 vs 1 defensive situations, which is used to analyse how often a team wins back possession. 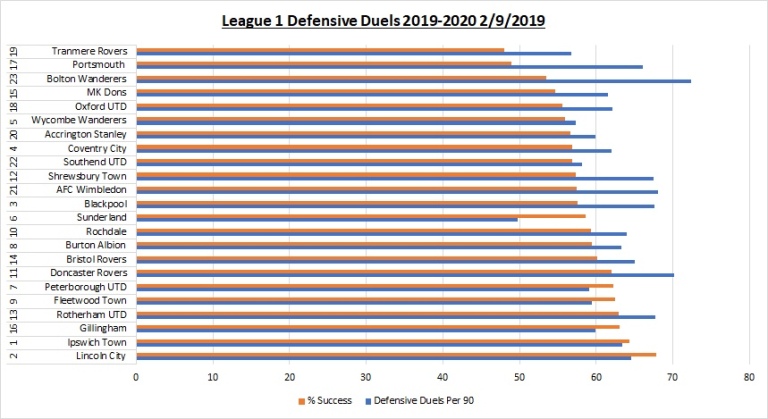 The high pressing strategy is resulting in more defensive duels but ultimately, Portsmouth are losing the second ball far too often. Pompey look lost without the ball, which is why in certain games, Portsmouth’s opposition have long periods of possession without any response.

Portsmouth’s latest away game against Blackpool is a perfect example. For much of the second half, Pompey failed to control the game because they kept on giving up possession despite having a high press.

Consequentially, Blackpool became more confident on the ball and set up an excellent counter attack for Armand Gnanduillet.

Anton Walkes makes an individual error, allowing for Aiden McGeady to drill in a low cross for Chris Maguire.

A lack of composure off the ball is what is causing Portsmouth to concede more goals than expected, despite the team allowing the fewest shots on target in the league.

Figure 2 Portsmouth have conceded three goals more than their expected goals against, meaning that nearly half of their conceded goals were caused by individual errors.

Portsmouth have conceded nearly half as many goals as expected. This comparison between expected goals against (xGA) and goals conceded supports what Portsmouth fans are watching; Pompey are conceding goals through a lack of defensive composure when the team does not have possession, causing individual errors.

For supporters, this is even more frustrating considering that Portsmouth have long periods of games where they seem in total control.

On-the-ball, Pompey look composed and do not give up possession that often (fig 3). Off-the-ball, when winning the second ball matters, Portsmouth struggle and cannot make the most of the possession the team has.

Overall, Pompey’s defensive shape and problems are as follows. Since Kenny Jackett has mainly opted for a 4-3-3 formation, this players in midfield press more. If Portsmouth retain possession for a long time, they rarely lose the ball but struggle to regain possession.

Although, even when Portsmouth control possession, they do not create enough clear-cut chances.

Figure 3 Portsmouth have the 2nd best record for conceding possession when they have the ball.

In an eerily similar fashion, Portsmouth are again struggling to make the most of their possession and capitalise on clear-cut chances.

Considering the over £2.5m investment into Marcus Harness and John Marquis, these early struggles are testing the patience of many Pompey fans.

It is not even the case that the team is unlucky and scoring less goals than expected. 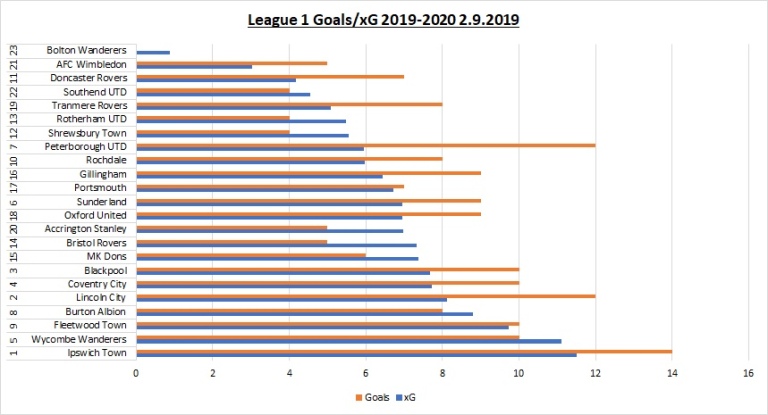 Figure 4 An expected goals graph for League 1. Portsmouth are on track for scoring as many goals as they create from chances.

Expected goals measures the quality of shots, how many goals a team should score with the amount of chances they create. Portsmouth are languishing in mediocrity for xG and goals, which is unacceptable for a promotion contender.

Even though the team has only played five league games, the inability to capitalise on possession and create chances still has not been solved from last season, despite Marcus Harness and John Marquis improving the side on paper.

For me, the problem with Portsmouth going forward is the service to the front three. The team are 21st in the league for key passes and 23rd for passes to the final third per 90 minutes in the league respectively. Many fans believe this is down to Kenny Jackett’s “hoof ball” style, but it is more complicated than that.

Pompey actually make more “progressive passes” than direct/long balls. A progressive pass counts as a pass that is 30m from half to half, or 10m in the opposition half.

Per 90 minutes, Pompey make the most progressive passes in the league but are the least accurate. Essentially, the attackers get into dangerous positions but often fail to make the final pass.

An example being John Marquis screaming at Ronan Curtis in the game against Blackpool because Curtis choose to shoot instead of play a through ball.

I have already discussed at length regarding how Marquis scores goals and so far, the build-up play does not suit him, or the rest of the front three.

In the final third, Portsmouth mainly cross the ball and rarely do anything else. In a 4-3-3 with Harness, Marquis and Curtis, the creativity and the possibilities going forward are endless. Limiting them to earlier crosses limits their play.

Now I need to address the elephant in the room.

Ever since the collapse at home to Coventry, Jackett has been under the firing line. His substitutions in the Coventry, Blackpool and Sunderland games were ineffective, bordering on detrimental.

The more worrying thing is I could not understand his logic. Against Coventry, going five at the back and to give them the initiative in possession was inexcusable.

Substituting Gareth Evans to play Ellis Harrison at right-wing was needless and could cause a rift in the dressing room. Harrison used to play left-wing but looked completely lost at RW.

In terms of playing style, Jackett has adapted slightly. Defensively, the higher press should give Portsmouth more possession.

The build-up play focuses more on possession and is less direct but the overreliance on crossing from wide areas can make Pompey’s pattern of play very one-dimensional.

Portsmouth can be as defensively solid as last season which is encouraging and at times this season, the team played well and I can see the 4-3-3/4-2-3-1 variant suiting the players.

Jackett’s new signings will need more time to settle into the side, especially giving large amount of injuries and sporadic fixtures. Soon, we can further evaluate Pompey’s defensive and offence shape. Although, it understandable that fans are starting to worry.

Rightly or wrongly, the goal is promotion by any means necessary. Anything less is a failure. Jackett’s decisions of late have divided opinion, and I’m worried that it may affect player performance.

With the Gareth Evans substitution and Brett Pitman’s most recent comments against Crawley in the EFL Trophy, squad morale appears to be at an all-time low.

Winning should solve these issues and it may be just an after-thought. Although, with expectations at an all-time high, any variable can seem like a potential obstacle.

Time may fix these problems, but it is logical that fans are starting to worry.

⭐️ #Pompey’s @ronancurtis96 named in The Football League Paper Sky Bet League One Team of the Day 👏
A point on the road but need more against Bolton and Cheltenham
Sports Mail: Back in Harness
Today’s attendance at @asfcofficial: 2,889 incl 892 #Pompey fans 👏