@pompey_rob headed to Plymouth as Pompey sought to achieve their best start to a season since 1988.

So it was upon us again, the first away day of the league season. After a good win on the opening day against Dagenham and Redbridge followed by pulling off one of the shocks of the round beating Derby in midweek, Pompey tails were up. But today was potentially a tough test of Paul Cook and the squad he has assembled.

As for my day, I set off at 625am from my house in south Birmingham, and breakfast in hand parked myself on the train at New Street for a 3 and a half hour trip to Plymouth.

After a pretty much uneventful journey I arrived in Plymouth and met up with friends at the station and the ground. We made our way to the Britannia Inn, a few minutes walk away, which had a good mix of Pompey and Plymouth fans. Despite the security staff employed (and some of their over zealous tactics) the atmosphere was friendly between the sets of fans.

So having left the pub we found our way round to the away section of Home Park. This was my first visit to this ground and I must say three sides of it are very impressive, including the away fans section, with a roof that helps create a noisy atmosphere! The 1,719 were in carnival mood and this reached a crescendo as kick off arrived.

Pompey dominated the first 15 minutes, created several chances and Plymouth simply couldn’t get a sniff at the other end with Christian Burgess in commanding form. Pompey’s passing was crisp and possession was retained for long periods, something we have lacked in recent times.

However, Plymouth got more into the game and created one or two opportunities but Brian Murphy was only called on to make one real save of note. As fan’s thoughts turned to the half time refreshments, Enda Stevens was brought down in the box and the referee pointed to the spot. Matt Tubbs stepped up and buried the penalty to send Pompey in ahead at the break. 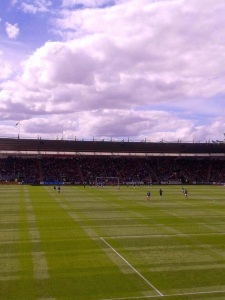 The second half started much as the first half had with Pompey, now attacking a very vocal away support, dominating for the first 15 minutes of the half, but without increasing the lead. Again Plymouth came back into the game, creating several chances, so Paul Cook replaced Tubbs with Stockley and Atangana with Hollands.

Stockley’s pace and strength unsettled the Plymouth defence (in fact he received a yellow card not long after coming on) and Gary Roberts was finding more time and space down the right, it was only a matter of time before a second goal arrived, which it did with 86 minutes gone. Roberts beat his man and was brought down in the area before picking himself up and putting away the penalty. 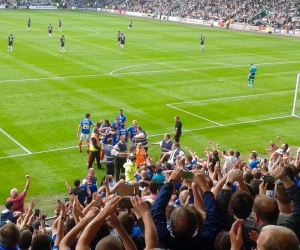 Cue wild celebrations from the players and fans. But Plymouth had other ideas as they pulled a goal back 3 minutes later. The fourth official indicated 5 added minutes, cue much nail biting, but Pompey held on to take all 3 points.

A very enjoyable away day all in all and a potentially tricky test passed!

John Marquis set to leave #Pompey after talks with another League One club
FT in @fawnl_official Southern Premier:
Sports Mail: Done by the Dons
Baz just couldn’t get on the end of it